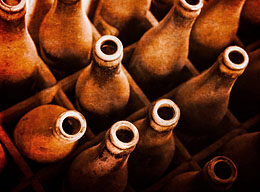 Time and again I hear someone say, “I  tried brewing once, but I didn’t stick with it.” Before you know it, excuses pile up like trub in the kettle! Maybe I’m biased, but I feel like just one brew isn’t enough to make final judgement on the hobby. In an attempt to convince some of those one-timers to stick with it, here are some of the most common reasons people quit brewing — and why they should dust off the brew pot and give homebrewing another shot.
1. “My first beer wasn’t very good.”
No one’s first beer is very good! A lot of brewers will tell you that their first homebrew was “drinkable”, and many will say that while some batches haven’t turned out perfectly, they’ve never had to pour one down the drain. So even if your first batch wasn’t on par with Boulevard or Sierra Nevada, don’t worry. Your second batch is likely to be much better than your first, and the more you brew the better you’ll get!
2. “I don’t have enough time.”
With kids, a job, and other commitments, I understand that time can get a little tight. Yes, it’s possible to spend most of a whole day brewing, but it’s also pretty easy to make sure that brew day takes no more than a few hours. Hopped extract kits (try the Munton’s, Connoisseur, Brewferm, Mountmellick, or Brew Canada kits) are the fastest, easiest, and most cost-effective way to brew. All you have to do is basically boil the extract with water, chill the wort, pour into a clean and sanitized fermenter, then pitch the beer yeast.
If you want to add a little something to make your brew more interesting, it’s pretty easy to add some dry hops, fruit, or spices during secondary fermentation. It doesn’t take much time at all. Then a couple hours on bottling day, and you’re set!
3. “My boyfriend/girlfriend/significant other doesn’t like beer.”
Chances are, they just haven’t had the right beer yet. After you’ve told them you want to be a brewer, see if you can figure out what kinds of flavors they like and brew something to their tastes. Maybe a fruit beer? Maybe they’re a closet hop-head and just need an American IPA to figure out what real beer tastes like. Gluten-sensitive? We’ve got a kit for that. If worse comes to worst, more beer for you!
There are tons of reasons people homebrew. Don’t you think it’s time to give it another try?
——————————————————————————————————
David Ackley is a beer writer, brewer, and self-described “craft beer crusader.” He holds a General Certificate in Brewing from the Institute of Brewing and Distilling and is founder of the Local Beer Blog.