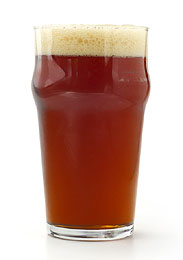 Love malty beers? Then Scotch ales are for you.
To research the history and characteristics of Scotch Ale, I dug into the Oxford Companion to Beer, probably the most comprehensive guide to beer and brewing ever published. (Tip: At the time of writing the Kindle edition of the Oxford Companion was on sale for less than $4.) In the Scotch Ale entry by Horst Dornbusch, I learned that:

It’s interesting to think about the affect of Scottish culture on the US and how many of those traditions live on in the beer world. Asheville’s Highland Brewing Co. and the Oskar Blues Old Chub come to mind.
But enough chit-chat — let’s do some brewing!
Key Characteristics: Malt
Scotch ales are malt-forward beers with a somewhat restrained use of hops. They range in color from amber to deep reddish-brown. We often see them brewed with a pinch of roasted barley and sometimes a bit of smoked malt. Dornbusch hypothesizes that the use of smoked malt isn’t especially authentic to Scotch ales, but rather a modern nod to the flavors present in Scottish whisky. It’s an optional component of the grain bill according to the BJCP, and if used, should be included with restraint.
Today’s homebrewers may opt for a base malt such as Briess Two-Row Malt or Munton’s Mild Ale Malt, adding small amounts of lower Lovibond caramel malt for color and caramel flavor and just a couple ounces of roasted barley for dry, grainy flavor. An alternative, perhaps more authentic approach would be to use almost exclusively base malt and achieve caramel color and flavor through an extended, vigorous boil. (The prolonged exposure to heat will cause the sugars in the wort to caramelize, contributing both color and flavor.) Dornbusch suggests a high mash temperature (~158F) to achieve some residual sweetness and body.
Hops
Keeping in mind that Scottish ales are malt-forward, the use of hops a generally modest. The BJCP guidelines call for the strongest Scotch Ale — aptly called Strong Scotch Ale (category 9E) —  to stay within 17-35 IBUS. It would be most appropriate to use English varieties of hops, such as Fuggles.
One interesting tidbit from the Oxford Companion to Beer states that historically, Scottish brewers may have used heather to flavor their beer. I’ve never brewed with heather, but it would be an interesting experiment to throw some heather into your Scotch ale if you’re so inclined.
Use the guidelines above to build your own all-grain Scotch Ale recipe. We also carry a Brewer’s Best Scotch Ale Recipe Kit that’s ideal for extract brewers.
Til next time…Slàinte!
————————————————————————————————
David Ackley is a beer writer, brewer, and self-described “craft beer crusader.” He holds a General Certificate in Brewing from the Institute of Brewing and Distilling and is founder of the Local Beer Blog.
————————————————————————————————
Resources: Oliver, Garrett; Colicchio, Tom (2011-09-09). The Oxford Companion to Beer (Oxford Companion To…). Oxford University Press. Kindle Edition.