With the spring and summer seasons come the harvest of strawberries, peaches, blueberries, and more. Why not experiment a bit and make something a little different – your own seasonal brew? These warmer months are ideal for adding fruit to beer.
Before you start throwing apples and oranges in the brew kettle through, it’s a good idea to think about how much fruit to use and where to add it in the brewing process.
Here are some suggestions for adding fruit to beer:
First, try a few commercial fruit beers and think about how much fruit flavor you want in yours. Several craft beers on the market are made with fruit, with flavors intensities ranging from barely noticeable to a full-frontal assault. Some examples include: Pyramid Apricot Ale and 21st Amendment’s Hell or High Watermelon.
So do you want just a hint of fruit flavor, or something more dominating? Think about where you want to be on that range for your batch of fruit beer. Depending on the fruit in question, you may want to start with half a pound or so of fruit per gallon and work your way up from there.
Next, pick your beer recipe as your base style. Fruit beers work well with pale ales and wheat beers, but also dark beers in some cases. Raspberry works well in stouts, especially when combined with chocolate. Pick out a recipe kit that you think might fit with your fruit of choice, or develop your own recipe.

Peel, puree, or juice?
Next, think about how you want to add fruit to beer. In some cases, such as when brewing a Belgian Wit, a little citrus peel is enough to impact the flavor of the brew. Orange is the most common, but why not experiment with lemon, lime, or grapefruit? Adding peel will likely contribute more bitterness than fruit flavor.
In my experience, adding fruit to beer in secondary fermentation is an effective way to get fruit flavor into a beer. The exact method for preparing the fruit will vary depending on the fruit in question and whether it’s fresh or frozen fruit you are adding to the beer. Fresh fruit should be peeled, frozen, and thawed, while frozen fruit should just be thawed to avoid shocking the yeast in the fermenter.
You could also add fruit juice or puree to the secondary fermenter. I suggest using 100% juice without preservatives or artificial colors and flavorings. Start with a cup or so of fruit juice or puree in a 5 gallon batch for a subtle flavor, or more for something more intense.

Whether you add whole fruit, pureed fruit, or fruit juice to your beer, keep in mind that some of the sugars in the fruit will ferment, raising the alcohol content of your homebrew and possibly adding fermentation time to the process.

Fruit Extract
Another way of adding fruit to beer is to use fruit extract and add a few drops to each beer bottle on bottling day. You may want to take a sample of beer and play with ratios to figure out how many drops each bottle should get.

Fruit Liqueurs
Fruit liqueur can be used as both a flavoring and a priming agent. Instead of priming with corn sugar, the sugar found in liqueurs is enough 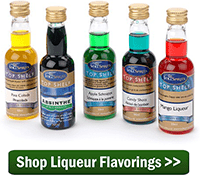 to carbonate your beer. Marty Nachel points out that “One 750ml bottle contains just about enough sugar to prime a 5-gallon batch of beer. Because the actual sugar contents of any liqueur depends on the company that made it (although it more likely has too little sugar than too much), you may want to add another ounce or two of dextrose to be sure.”
Have you every tried adding fruit to beer? How did it turn out? Share in the comments below!
—–
David Ackley is a beer writer, brewer, and self-described “craft beer crusader.” He holds a General Certificate in Brewing from the Institute of Brewing and Distilling and is founder of the Local Beer Blog.

4 thoughts on “The Essentials Of Adding Fruit To Beer”