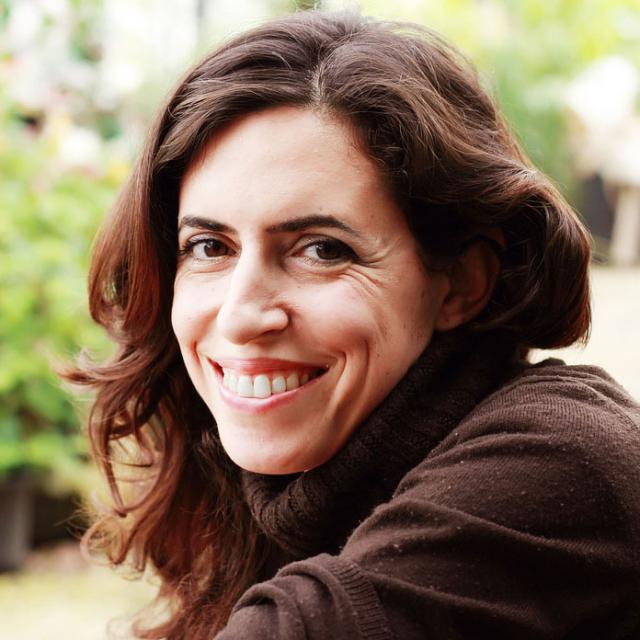 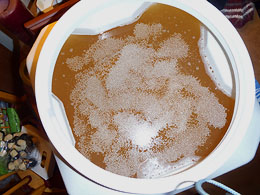 Last time I “saw” you all, I had just received my new home winemaking kit from ECKraus.com.  Due to the timing of things this past week, I let the kit sit for almost a couple of days before I did anything with it.  I finally had some time on a chilly afternoon to start Step 1 of the wine making kit instructions.
I know later on I’m going to think my feelings were pretty silly, but right now I feel pretty nervous about whether or not this is actually going to work!  Eek!  Did I sterilize everything sufficiently?  Is the temp OK?  Is that cat going to find a way in and drink it?
It’s not like I have much space to deal with here.  I live in a 750 square foot 2 bedroom condo with my fiancé, our two big dogs, and our cat. That leaves very little space for winemaking, but I’m going to try my best to make it work.  Right now, I have everything situated on a little side table in between the living room and dining areas, as this side of the condo tends to retain heat better than the two bedrooms.  I wrapped the spout of the fermenter with plastic wrap and a twist tie, in hopes that it’ll mask any smells from the cat or dogs and hopefully avoid them trying to get into it.
So, getting right down to it!
I first sterilized all the equipment I was going to need today by following the kit instructions on the cleaning solution I received with my kit.  I’m hoping I did it right—I’m banking on the fact that the kit is brand new, so hopefully even if I “missed a spot”, it’ll still be OK.
Once sterilization was finished, I launched into “Stage 1” of the wine making kit instructions.  Removing the base wine from the bag was a little tough at first, as I wasn’t sure how much force I would need to remove the cap while avoiding any spillage!  It ended up being easier than I thought, though I did have to use a little elbow grease to get that cap off.
For water, I ended up getting bottled water from the store, and made doubly sure that it said it had undergone reverse osmosis, as suggested in the instructions.  I actually used one gallon of the bottled water for the sterilization process, then used another 4 gallons for the wine (the juice concentrate itself was nearly 2 gallons).   The wine making kit instructions said I could use tap water as long as I let it sit out overnight to blow off any chlorine that may be there, but I was too nervous to try that on my first go around, and I didn’t really have anywhere to put 5 gallons of water overnight since my place is so small.

The initial specific gravity reading on my juice was 1.086, which was in between the recommended 1.080-1.095 levels.  So far, so good, right?
I basically followed all the basic kit instructions to a T, reading them all multiple times just to be sure I wasn’t forgetting everything.
The only thing I’m not sure about is the use of the cover and/or airlock.  The wine making instructions said to close the lid and use the airlock, though when I went to the ECKraus blog, there was a recommendation saying NOT to use the airlock but to leave the lid open for at least the beginning in order to get the fermentation process off on a good foot.  My problem with leaving the lid open is that the cat is going to drink it.  I know she will—she’s a piggy!    I think what I might try is leaving the lid just resting on top but not sealed while I’m in the room, then when I have to leave, I’ll close it and use the airlock.  Hopefully this will allow the fermentation to get enough air to get started, whilst keeping the animals out.
Other than the lid, I feel pretty confident about this first stage, and I’m hoping that within the next 18-36 hours, I’ll be confident that fermentation has actually started.  I think right now it kind of smells like it (when I open the lid and sniff), and there are some tiny bubbles on the side of the fermenter, but it’s still too early to tell if it’s going to get started or not.
In the meantime, I’ll keep my fingers crossed and hope for the best.  Now, it’s just a matter of waiting 7 days.  Hopefully at the end of that time I’ll have a positive progress report to give you all!
Cheers!
See more blog posts from Leigh Erwin