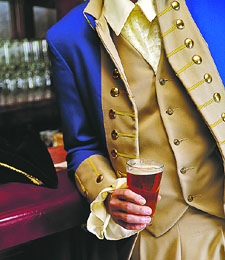 Since the earliest Sumerians fermented grains in pots some 10,000 years ago, making beer at home was for a long time an important part of domestic responsibilities. Extensive beer making traditions exist around the world whether in Africa, Asia, or the Americas, where indigenous cultures used what resources they had available to make the nutritious, seemingly magical beverage that we know as beer. However, in the United States, the homebrewing tradition nearly died out.
In the early days of the American colonies, brewer’s malt was one of the most important commodities. The colonists carried copious amounts of malt and hops (as well as beer!) with them from Europe to the New World. Sanitation wasn’t well understood, so beer (which is boiled in the brewing process) and other alcoholic beverages were considered safer to drink than water. It was a matter of necessity to have a steady supply of beer.
Many households arriving from Europe brought along the necessary equipment for making beer at home. Numerous records show that the wealthiest families developed fairly sophisticated brewhouses, though certainly there were families who were less well off who made do with more basic beermaking equipment.
Many of the New World settlers set out immediately to find ingredients that could be used for brewing. This led many of them to discover the local maize, though it wasn’t long before barley, wheat, rye, and hops were planted throughout the colonies. In the late 1700 and early 1800s, Thomas Jefferson wrote about the beer that was brewed at his home in Monticello, using the resources produced at his farm and in the surrounding area.
Brewing at home was often the responsibility of women. In fact, Thomas Jefferson’s wife brewed 15 gallons of beer every two weeks! It’s encouraging that female brewers today are growing in number, both on the professional and hobbyist level.
As the country entered the mid 19th-century, brewing became the domain of large industrial companies (think of Yuengling, founded in 1829). Through the Industrial Revolution, these companies could brew enormous amounts of beer at a higher quality and lower cost than most households could do at home.
And then came Prohibition. Along with the sale of alcohol, making beer or wine at home became illegal in 1919.
So how did we get from a point where beer couldn’t be sold, or even made at home, to where we are today? Stay tuned for Part Two to find out!
—–
Resources: Thomas Jefferson Encyclopedia: Beer, Homebrewers Association: History of Homebrewing, Brewed in America
————————————————————————————————————
David Ackley is a beer writer, brewer, and self-described “craft beer crusader.” He holds a General Certificate in Brewing from the Institute of Brewing and Distilling and is founder of the Local Beer Blog.