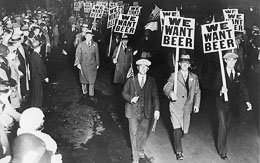 When we left off in Part One of this “History of Homebrewing” series, Prohibition outlawed the making of beer at home. Still, families didn’t give up on their desire for beer, and the breweries did their best to survive through the dry spell by producing non-alcoholic “near beers” and, not so discreetly, products that could be used for beer making. Red Top and other companies offered malt barley syrup for home “cooking.” Prohibition did little to stop homebrewing: it’s estimated that Americans brewed over 700 million gallons of homemade beer in 1929!
When Prohibition was repealed in 1933, winemaking was legalized, but not homebrewing. It wasn’t until 1978 that Jimmy Carter signed into law a bill that legalized homebrewing, but by this time America’s breweries had grown, consolidated, and drastically reduced the variety of beer in the US, resulting in the dismal beer landscape that existed from Prohibition to the 1970s. It was up to the few remaining homebrewers to resurrect lost beer styles and build interest in “craft” beer.
By the time Jimmy Carter officially legalized homebrewing in 1978, Charlie Papazian had picked up the hobby. In 1978, he and Charlie Matzen founded the American Homebrewers Association and published the very first issue of Zymurgy magazine.
During these early stages of the modern brewing renaissance, there were a number of resources published that allowed homebrewers to learn about brewing and beer styles. Papazian published the Complete Joy of Homebrewing in 1984. Several of the early brewing books are still popular today.
Even with the growing enthusiasm for homebrewing, not every state permitted it. It wasn’t until this year (2013) that Alabama and Mississippi became the 49th and 50th states in the US to legalize homebrewing!
Some of the success of homebrewing must be attributed to the homebrewers who were determined to make a living from their passion. If it weren’t for the likes of Jim Koch, Ken Grossman, and Sam Calagione, homebrewing probably wouldn’t have the following that it does today.
Just check out these stats from the American Homebrewers Association!
2012 Homebrewing Stats

So, if you’ve read this far, you’re probably a homebrewer, part of a long tradition of American brewing. Why do you brew? Why do you love it?
—————————————————————————————————-
David Ackley is a beer writer, brewer, and self-described “craft beer crusader.” He holds a General Certificate in Brewing from the Institute of Brewing and Distilling and is founder of the Local Beer Blog.
—–
Resources: Homebrewers Association: History of Homebrewing,