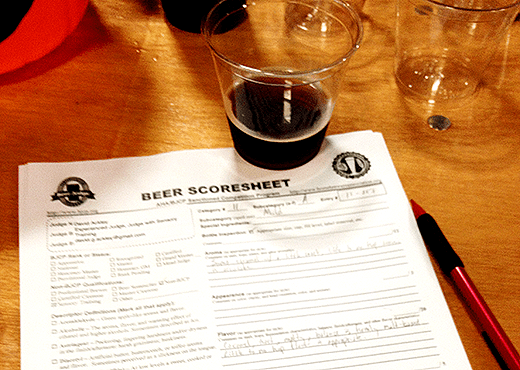 I recently had the opportunity to judge at a local homebrew competition. Judging homebrew in competition is a great way to improve your sensory technique and your abilities to detect subtle differences in ingredients within a certain style. I will share my experiences to shed some light for those who are interested in competing in homebrew competitions.
The competition I judged for was a BJCP-sanctioned homebrew competition. That means all of the beers were submitted in and judged against categories based on the Beer Judge Certification Program Style Guidelines. Though the BJCP has recently announced changes to the style guidelines, this competition was judged using the 2008 Style Guidelines.
What typically happens with these homebrew competitions is that the host homebrew club seeks out volunteer judges and stewards. Judges judge the beer; stewards facilitate distributing the entries to the judges. Judges are assigned to different style categories. There are at least two judges per category. Sometimes categories are combined if there aren’t enough judges to go around.
For this homebrew competition, I was assigned to judge English Brown Ales and Fruit Beers. I’ll start by sharing my experience with the English Brown Ales.
One of the challenges in judging this category was in the diversity of the three sub-styles within the broader category:

If you click the links above, you’ll see that each has fairly specific specifications for the aroma, flavor, appearance, and mouthfeel of each beer. The judge scores each entry on each of the four sensory areas, as well as their overall impression. Scores are given by each judge, which are then averaged out by the steward. The top three beers in each category are awarded prizes, with the top beer in each category moving forward to compete for the Best of Show (the top three best beers out of the whole competition). 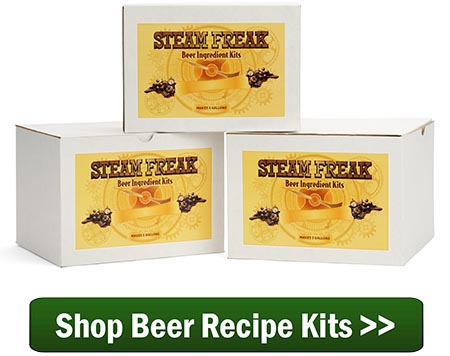 In this homebrew competition, there were about 5-6 entries each for Mild and Northern English Brown Ale, and a single entry for Southern English Brown Ale. It quickly became apparent how subtle the differences could be between each beer. Though each beer within a subcategory may look identical, some would have more prominent malt flavor than others. Some had more of a toasty character, while others had stronger caramel notes. Most of them were very good, but a few had some fermentation faults and off-flavors, such as diacetyl, in which case the judge is expected to make suggestions for how to fix it.
In judging the English Brown Ales, I found that while color may be similar between the three subcategories, Mild is more nutty, Southern English Brown Ale more fruity, and Northern English Brown Ale more nutty with a more assertive hoppy character. The Southern English Brown is very fruity compared to the Mild and the Northern English Brown. With the Mild being such a delicate style, it was hard to hide subtle faults. The beers with clean fermentation were quite good, and those with fermentation problems stuck out. There just aren’t that many hops to hide behind.
For the best beers, the key was balance, which leads me to believe that to achieve such a balance, it really requires a brewer to brew the beer multiple times to really refine the recipe. If you’re interested in competing in homebrew competitions, you might consider picking a style or two to concentration on in order to really get your recipe dialed in.
Have you done any judging in a homebrew competition? Do you ever submit beers in competition to be judged? What has your experience been like?
—–
David Ackley is a beer writer, brewer, and self-described “craft beer crusader.” He holds a General Certificate in Brewing from the Institute of Brewing and Distilling and is founder and editor of the Local Beer Blog.
—————————————————————————————————————–
Ed Kraus is a 3rd generation home brewer/winemaker and has been an owner of E. C. Kraus since 1999. He has been helping individuals make better wine and beer for over 25 years.