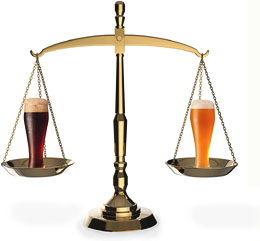 Ready to take your homebrewing to the next level? Consider being a certified beer judge! Guest blogger Jason McLaughlin gives us the run down:
——————————————-
Many homebrewers have tried entering a homebrew competition at some point to see either how their beer stacks up against others, or to just get feedback on where one may have gone wrong. The job of a beer judge is a big one, and qualified BJCP (Beer Judge Certification Program) judges have gone through extensive training to become proficient and calibrated on knowing when a beer fits a particular beer style (Is this a Baltic Porter or a Robust Porter?), or perhaps has any off-flavors or aromas.
The Role of a Beer Judge
Judges need to know when a brewer has nailed a style, or what action they could take in the future to enhance their beer. They also need to understand and detect beer faults, and inform the brewer where in the process it may have stemmed, and how to correct it in the future. It’s truly a huge job because entrants are paying hard earned money in entry fees and often shipping expenses for their beer to evaluated and scored. Judges need to be educated and have sharp palates, and therefore the process of becoming a judge is not set up to be obtainable without extensive studying and… well… drinking beer.
About the BJCP
At the core, the purpose of the BJCP is to promote beer literacy and the appreciation of real beer, and to recognize beer tasting and evaluation skills. One becomes a BJCP ranked judge by taking a series of exams that test potential judges on their brewing knowledge, as well as their tasting and communication skills. The first step, called the BJCP Beer Judge Entrance Examination, is an online exam that is made up of questions dealing with the BJCP Style Guidelines, technical processes of brewing, knowledge of ingredients, recipe formulation, and beer faults. Examinees with passing scores are then qualified to take the BJCP Beer Judging Examination, which is a practical tasting examination administered at a registered exam site.
Studying for the Exam
To cover all the topics that can be included in taking the exams, a firm understanding of brewing practice is required. Books such as Designing Great Beers and Complete Joy of Homebrewing are fantastic resources. Many potential judges also form study groups to go over the materials they are required to know. A study group is a great way to learn with others and gain perspective of all the facets of brewing and evaluation. Class time is often comprised of covering the technical information and science behind the brewing processes and ingredients, studying of the BJCP Style Guidelines and the history of styles, and in depth beer style evaluation of classic as well as flawed examples. The knowledge one learns going through a well planned study group is vast, and becoming a BJCP judge may quite possibly be the single best thing a homebrewer can do to better their beer. Judges have all the tools they need to evaluate their own beers, and that is a huge advantage when creating the perfect brew.
Interested in Becoming a Judge?
A lot of information is available on the BJCP website, including test dates and locations. Due to the high interest in becoming involved with the program, scheduling the tasting portion of the exam can be booked out for quite a while. The exam is individually graded by volunteers, which puts a limit on how many exams can be administered in a month. With that being said, there is no better time than present to round up your brewing friends or local brew club members to start the planning now.
In the meantime, a great way to see first hand what goes into a BJCP sanctioned competition is to volunteer as a steward at a homebrew competition. Competition organizers are almost always in need of extra help, and what better way to see behind the scenes of judging is all about!
——————————————————————————————————
Jason McLaughlin is a homebrewer, National Level BJCP certified beer judge, and one of the admins of the Nebraska Beer Blog. Additionally, he is a columnist for Omaha Food & Spirits and President of the Lincoln Lagers Homebrew Club.