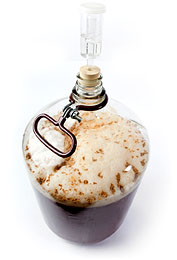 Over on the E. C. Kraus Wine Blog, Ed has been sharing some of the key winemaking terms used by professional and hobbyist winemakers.
A great deal of jargon also surrounds the world of brewing. To help you talk like a brewer and improve your craft, here are some of the brewing and beer terms you should add to your playbook:

Are there any homebrewing terms you’d like to learn more about? Leave a comment below!
————————————————————————————————–
David Ackley is a beer writer, brewer, and self-described “craft beer crusader.” He holds a General Certificate in Brewing from the Institute of Brewing and Distilling and is founder and editor of the Local Beer Blog.