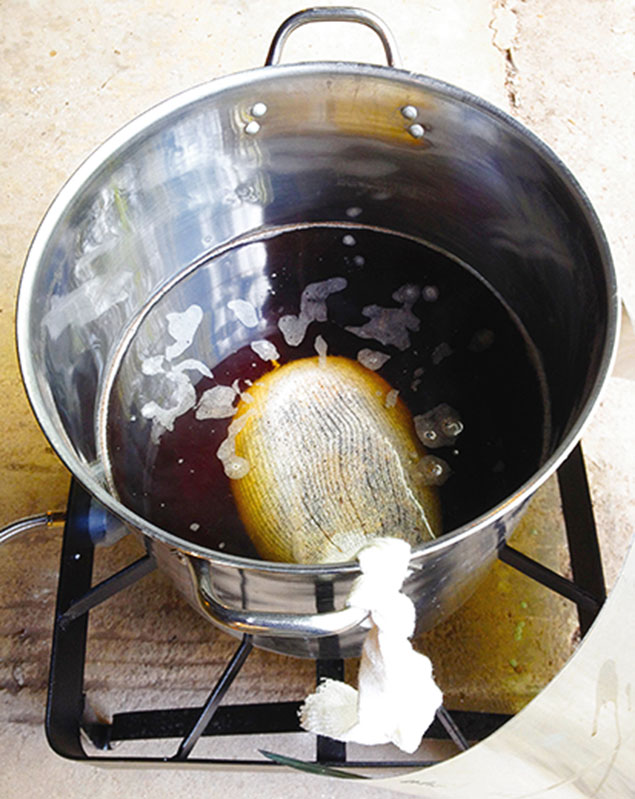 This weekend I brewed my latest homebrew recipe kit from E. C. Kraus: Captain Cogsworth Coffee Stout.
Though I often brew all-grain, I enjoy other methods of making beer. For example I like partial mash brewing for a number of reasons. For one, partial mash brewing takes less time. I can usually do a partial mash brew in about four hours, as apposed to six for all-grain, cleaning and sanitation steps included. Most of the time savings come from eliminating the mash and lauter steps. Bringing the wort to a boil is faster too, since you’re dealing with about half as much liquid. It’s also nice that after steeping the grains you only have to dispose of half a pound of grain, not twelve, and there’s no mash tun to clean out.
When I brew partial mash brewing kits, I will sometimes make small adjustments to the recipe in the box. For this coffee stout beer kit, I added a little extra base malt to the steeping grains for a more grainy malt flavor and a little diastatic power. The extra grains may contribute some extra body and mouthfeel as well.
The first step in partial mash brewing (after cleaning and sanitation, of course) was steeping the specialty grains. I used pure RO water from the store. After about 20 minutes at 150°F, it was time to bring the wort to a boil.

This is the point where malt extract is added to the wort. Regardless of whether brewing on the stove or on a gas burner, I always turn off the heat before adding the malt extract. This helps prevent a boil over. After adding the malt extract, the wort smelled glorious! A lot like hot cocoa.
After bringing the wort to a boil, I added the first round of hops, in the case of this Cogsworth coffee Stout, one ounce of Northern Brewer. Thirty minutes later, I added the rest of the hops: one ounce Tettnanger. With 15 minutes left in the one-hour boil, I added a couple additional ingredients that weren’t called for in the beer recipe with this kit: Irish moss and yeast nutrient. In my experience, these can help with clarity and fermentation, and I’ve simply gotten into the habit of adding them to every brew.
As with bringing wort to a boil, chilling a wort with the partial mash brewing method is much faster. I was able to chill the wort with my immersion wort chiller in basically half the time compared to doing a full wort boil. After that, all I did was pour about two gallons of water into my sanitized fermenter, pour the wort on top, top off to five gallons, and then stir to mix and aerate. Sometimes I will top off a little more than five gallons just to account for losses in trub.

So far, the partial mash brewing directions that came with this brew kit have worked well. I took a quick hydrometer sample (1.059 – right on target!), pitched the yeast, and in a couple weeks I’ll be ready to add the coffee! Based on how the coffee smells…I’m excited!