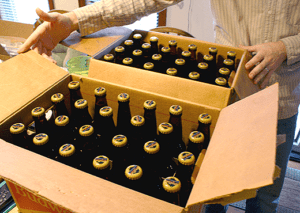 Last night I bottled the Steam Freak Captain Cogsworth Coffee Stout. This brew requires a somewhat unusual bottling process, so I’ll walk you through it. The objective: add the coffee and the priming sugar at the same time.
Luckily, both can be done without a major modification to the bottling process. Basically, instead of mixing the priming sugar with water, the instructions that came with this coffee stout beer kit call for mixing the priming sugar with coffee. I like to do things differently, so instead of making a regular cup of coffee, I decided to make cold brew.
Cold brewed coffee is simply ground coffee steeped in cold water. The idea is that this avoids extracting harsh, burnt flavors from the coffee. The only catch is that it takes longer to brew than traditional coffee brewing methods, about 24 hours instead of a few minutes. Here’s how I went about adding cold brewed coffee to my coffee stout:

Ideally, using the cold-brewing coffee method will bring a smooth, aromatic coffee character to beer, without adding much bitter astringency. Stay tuned to see how it this coffee stout beer kit turns out!
Interested in other coffee-flavored beer recipes? Try this Sierra Nevada/Ninkasi Double Latte Clone and check out these tips for brewing beer with coffee.