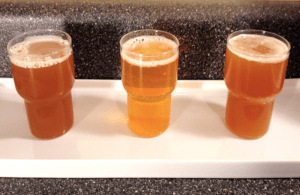 One of the hardest parts of homebrewing is the waiting – especially after the beer has been bottled or kegged. But this is an important time for the beer. You could call it a “self discovery” phase. Brewers call it conditioning.

While the beer is still conditioning, it is often referred to as “green beer”.

So back to the Flower Power clone and my struggle with patience…
I was curious to see how the beer is progressing, so I did a taste test with the kegged beer, the bottled beer, and the original Flower Power. I was especially antsy because people always says that IPAs be enjoyed fresh (e.g. Stone’s “Enjoy By” IPA). But how fresh is too fresh? At what point does an IPA reach its peak?
The trouble with this line of thinking is that there are just too many variables at play to develop a hard and fast rule. Among the many variations that can affect flavor perception include:

Not to mention variations in the brewing process. So with the knowledge that this experiment is inherently flawed, let’s see what we have.

Flavor
Because the original Flower Power has had significantly more time to age (bottles were purchased four months ago) it’s hard to make comparisons. Still, the weeks and months that go by don’t seem to diminish the hop character in the Flower Power. With the clones, the flavor profile is remarkably similar to the original, but it’s obvious that they need more time to condition. The bitterness is slightly harsh and I detect a slight solvent/alcoholic character. While it’s tempting to overthink the situation and try to identify potential faults, I’m going to do my best to “Relax, don’t worry, have a homebrew,” just like Charlie Papazian likes to say, and give the beer more time to condition.
So, we’ll give the Flower Power clone another week or two and then do another side-by-side. Until then, I’ll be enjoying my Captain Cogsworth Coffee Stout!
—————————————————————–
Review the whole Flower Power clone brewing process below: