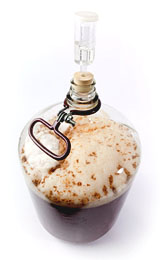 I brewed a decent Scottish ale. Racked it after primary fermentation of about 7 days or so. But just haven’t made time to bottle it. It’s been in the secondary about 5 or 6 weeks. The air lock suggests it’s still fermenting. I pulled out a glass. It’s of course flat, but the flavors are good. If I bottled as normal with priming sugar, will there be enough living yeast to carbonate this late in the process. What should I do to ensure my finished product doesn’t seem like I let it sit too long?
Name: Justin V.
State: PA
—–
Hi Justin,
Thanks for your question!
Your Scottish ale is almost definitely done fermenting and if it tastes good, it should be perfectly fine for bottling as you would normally. Five to six weeks is a little longer than necessary for a typical secondary fermentation, but it’s not an excessive amount of time  or cause for alarm. In fact, some beer styles require extended time in the fermenter to condition or to ferment completely.
As long as you haven’t filtered your beer, there should still be enough beer yeast in suspension for them to consume the priming sugar and carbonate your beer. Even so, in racking from secondary to your bottling bucket, this will stir up a little beer yeast, so I wouldn’t worry about having enough yeast to do the job. You may want to read more in this post about carbonating your homebrew.
The only thing that could possibly cause issues for you is yeast death. When yeast dies it can rupture, resulting in what is called yeast autolysis. The dead cells can leech some unpleasant off-flavors into your brew. If you have the off-flavors from yeast autolysis you will know it. It would have to be a pretty extreme scenario (such as in John Palmer’s example) to cause any problems, and since you racked to secondary, you already left most of the spent yeast in the primary fermenter. Chances are that if you kept the fermentation sealed and at a reasonable temperature, and if the beer tastes fine at this point, your beer will be ok.
In the event that you do pick up some off-flavors when you’re eventually ready to drink your brew, time is your best friend. Leave the bottles alone for a month or longer and you may well discover that unpleasant flavors balance out over time. I’m often surprised by how a homebrew can develop in the bottle over the course of several months.
So that’s the long answer to your question! The short answer is from Charlie Papazian: “Relax, don’t worry, have a homebrew!”
Til next time…Cheers!
——————————————————————————————————-
David Ackley is a beer writer, brewer, and self-described “craft beer crusader.” He holds a General Certificate in Brewing from the Institute of Brewing and Distilling and is founder of the Local Beer Blog.