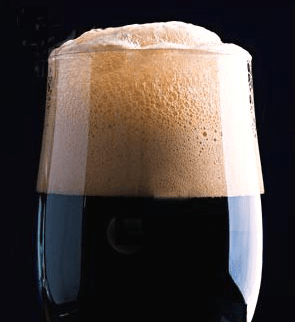 The Beer Judge Certification Program classifies six kinds of stout: Dry (or Irish) Stout, Sweet Stout, Oatmeal Stout, Foreign Extra Stout, American Stout, and Russian Imperial Stout. Probably the least descriptive of these is the Foreign Extra Stout. What makes a stout “foreign” and how is it different from the other types of stout?
The Foreign Extra Stout is born from a variety of stouts that were traditionally brewed for foreign markets, especially those in the tropics. You may encounter this type of stout as a “tropical” stout. Examples of Foreign Extra Stout include Guinness Foreign Extra Stout and Dragon Stout from Jamaica, both a 7.5% alcohol by volume.
A foreign extra stout beer recipe may produce a beer that is sweet or dry. The main defining characteristic is that foreign extra stouts are brewed to a higher gravity than sweet or dry stouts, presumably to make them easier to ship. They may also have more hop bitterness (as high as 70 IBUs), which would have helped with shelf-life as well. Keep in mind that foreign stouts should have little to no flavor or aroma hop character. Hoppier stouts fit better in the American stout category.
Another characteristic that may be present in foreign extra stouts is esters. Esters are a fruity aromatic produced during fermentation, primarily by ale yeast. Between the fruity esters, and the high gravity, some foreign-style stouts may come across as fairly sweet and rum-like, making them especially deserving of the name “tropical” stout.
Below are the BJCP stats for Foreign Extra Stout:

The Foreign Extra Stout beer recipe below comes from the book Homebrewing for Dummies. It won a first place award at the American Homebrewers Association National Competition.
New Stout II, by David and Melinda Brockington
(5-gallon batch)
Specs
OG: 1.071
FG: 1.019
ABV: 6.8%
IBUs: 38
SRM: 40+
Ingredients
9 lbs. English pale malt
3 lbs. Roasted barley
.5 lb. Crystal 40L malt
.5 lb. Black patent malt
2 oz. Kent Goldings hops at :60
Wyeast 1084: Irish Ale Yeast
Directions
The day before brewing, prepare a 2L yeast starter (or just use two packets of Wyeast 1084). Mash crushed grains at 155˚F for 60 minutes. Sparge to collect 6.5-7 gallons of wort in your brew kettle. Bring to a boil and add Kent Goldings hops. Boil for 60 minutes. Whirlpool, chill wort, and transfer to a clean, sanitized fermenter. Aerate well and pitch yeast at 72˚F or below. Ferment at 65˚F for two weeks. Bottle or keg for 2.3-2.6 vols CO2.
If you’ve never brewed a foreign extra stout beer recipe now is the time to do it. This is a killer recipe that has become very popular among many homebrewers.
———————————————————————————————————–
David Ackley is a beer writer, brewer, and self-described “craft beer crusader.” He holds a General Certificate in Brewing from the Institute of Brewing and Distilling and is founder and editor of the Local Beer Blog.