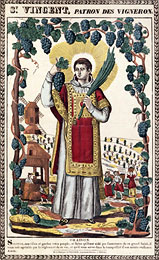 We are going to go off topic a little bit here and talk about something that I find very fascinating. In any industry or business where there is a lot invested, there can be a lot of superstition revolving around those involved.  Maybe a soccer player wears dirty socks throughout the season for good luck, or someone else carries around a rabbit’s foot for “protection”.  Even still, some people may wish to knock on wood in order to avoid jinxing themselves into quickly falling into bad luck.  For the religious or spiritually inclined, they pray!
There seems to be patron saints for everything, with patron saints being those entities some pray to in order to be blessed with good luck and good fortune.  Wine makers are certainly no different!  In fact, there are several patron saints of wine makers, and whether you are spiritual, religious, or think this is all a fairy tale, it’s always fun to know a little bit of history and culture related to wine makers and the history of winemaking!
There are several patron saints of wine makers, with each having their own special niche in the patron saint realm.  The most well-known patron saint of wine makers is probably St. Vincent of Saragossa.  St. Vincent is not only the patron saint of wine makers (vintners) but is also the patron saint of vinegar makers.
Other patron saints of wine makers include St. Trifon the Pruner, St. Amand of France, St. Lawrence of Rome, St. Martin of Tours, St. Morand of Cluny, St. Urban of Langres, St. Goar of Aquitaine and St. Walter of Pontnoise.
St. Amand of France was also known as the patron saint of brewers, vintners, inn keepers, and bar staff.  He was given these names due to the fact that he did much of his teaching in wine making and brewing regions.  His Saint’s Day is celebrated February 6th.
St. Morand of Cluny was also known as the patron saint of people in the grape and wine trade.  One interesting fact for this patron saint of wine makers was that it was believed he lived the entire period of Lent (40 days of fasting) on one cluster of grapes. His Saint’s Day is celebrated June 3rd.
St. Urban of Langres was also known as the patron saint of barrel makers, vine growers, vine dressers, and vintners.  While trying to escape persecution, St. Urban hid in a vineyard in France.  He managed to convert the vine growers to Christianity and they helped him escape and spread his message. His Saint’s Day is celebrated January 23rd.
If you’re fascinated by the history of wine makers and winemaking, as well as the history and culture of religion, learning about these historical individuals is not only entertaining but educational!
———————————————————————————————————
Ed Kraus is a 3rd generation home brewer/winemaker and has been an owner of E. C. Kraus since 1999. He has been helping individuals make better wine and beer for over 25 years.