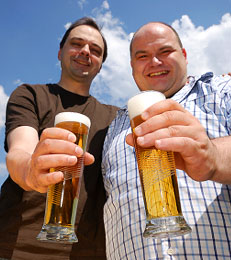 In a recent survey that was conducted at a university, it was stated that beer was the highest consumed hard drink among people of all ages, (we are talking about adults of course). Beer is an every-night-out’s staple drink. You might be going through dozens of bottles every month for your weekend parties, but did you ever stop to think how this amazing drink is brewed? It’s not really rocket science.
To brew it yourself, you need some very simple homebrew stuff that is generally present in a regular kitchen.  Beer generally takes approximately three weeks to brew.
To begin with, gather all the home brewing ingredients that is called for in your beer recipe. This usually consist of malt extract, specialty grains, beer hops and beer yeast. Make sure the home brewing equipment you use is sanitized.
Next step is to add the specialty grains to hot water, usually at about 160° F. After an hour or so, filter the barley.  Now add to this tea of sorts the malt extract and bring to a boil.
Add the beer hops into the wort. Hops are responsible for a lot of the flavor in a beer. Hops are bitter in taste, so you need to take care. Also, the more you boil hops, the more they will lose their bitter flavor, so it is important that you follow your beer recipe directions closely during this step.
Cool the wort and add water to it until the total volume reaches the intended batch size. Now you can add the beer yeast and let the fermentation begin. Once the beer yeast has completed the fermentation, usually about 5 days, it will produce what you’ve been craving for. Yes, alcohol and carbon dioxide. Alcohol adds an amazing taste to beer, and carbon dioxide takes the form of foam.
Now it’s up to you. You can put your homebrew on tap and keg the beer, or you can bottle it allow it to carbonate within the beer bottles, a process known as priming.
Now your down to the very last step — drinking. Having a world a beers available to you that you’ve made with your own efforts is a very exciting and fulfilling venture. And, it’s easier to make than it’s ever been. Beer ingredient kits have made the steps above easy to accomplish with there pre-measured ingredients and proven beer recipes. So why not give it a try.
To read more about how to make your own beer you might want to take a look at “5 Simple Steps To Making Beer“. This is another blog post the goes over the brewing process in a little more detail.