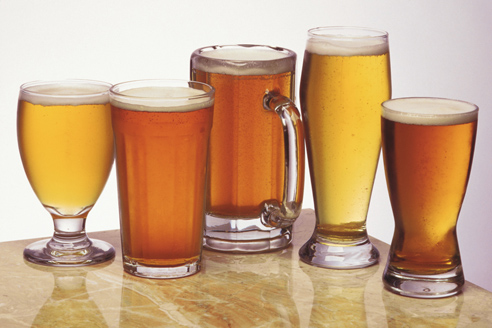 Beer brewing is a time-honored tradition that has been under development for thousands of years.  Today, over 750,000 Americans engage in the practice from the comfort of their own homes.  Thanks to the conception of beer brewing kits, it is now safer than ever for you to unleash your inner brewmaster.
The notion of a safe home brew is not an oxymoron; reality portrays an exercise that is no more dangerous than cooking pasta.  It is a complex albeit easy process that requires around four to five hours of work spread out over a minimum of a four week period.  It consists of five steps: brewing, cooling and fermenting, priming and bottling, aging, and everyone’s favorite, drinking.  Unlike distillation, the process used to make hard liquors, homebrewing does not involve high pressures or flammable liquids.  Instead, it incorporates yeast and boiling liquids in a fashion similar to making a loaf of bread or a pot of spaghetti.
The fact of the matter is that the most unsafe element of beer brewing is already installed in your home.  While purpose-built propane burners are available for purchase, most aficionados choose to brew beer on the same stoves on which they prepare their meals.  This is not to say homebrewing is without its risks; however, a good brewer will identify them ahead of time and prepare accordingly.  In addition to acquiring a quality beer making equipment, you can follow this list of general guidelines to ensure a positive brewing experience:
–       Be aware.  The fermentation process produces carbon dioxide and inhaling large quantities can cause you to black out.  While this poses a much greater risk at commercial breweries, it is still something to be mindful of.
–       Glass breaks.  This seemingly obvious fact can become painfully apparent at inopportune times.  In order to avoid accidents, you might want to consider using plastic carboys as opposed to glass ones during the fermentation process.  The former is less likely to break and has no adverse effect on taste.  You also need to make sure your beer is fully fermented before bottling to prevent your bottles from exploding.  Once preserved, be sure to store it in cool, dark conditions.
–       Be mindful when boiling water or wort.  Do not leave your pots unattended, ever, and make sure they are large enough to contain the heated liquids.  Keep in mind that what you are boiling is hot and is occasionally liable to boil over.
–       Respect your equipment and ingredients.  Everything should be fresh, stored properly, and sterilized.  Older or improperly stored ingredients can ruin a batch, and good sanitation is necessary to avoid contamination.  You are incubating a living entity and you want to take the best care possible to ensure a healthy and full development.