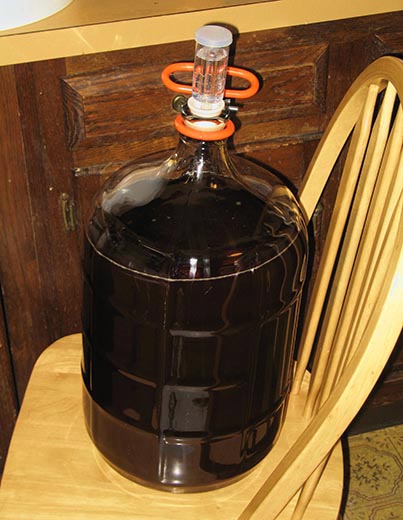 Well, the last time we “spoke”, I had the unfortunate disaster of a busted spigot on my hands.  In addition to needing a carboy for my Carmenere wine, I also needed a carboy for the Pinot Chardonnay that had been sitting around for 2 months.  Racking time for this white wine was now!  Good timing, huh?
I still didn’t have another carboy and the primary fermenter was now acting as a carboy for the poor Carmenere wine.  I could have ordered a new spigot from ECKraus to fix the other carboy I had (with the spigot hole in it), but based on my schedule at the time, I really needed a solution like that day.  So, I’m afraid to admit that I cheated on ECKraus.  It was just a little bit!  The other store doesn’t mean anything to me, I swear, ECKraus!  😉  hehehe.
There happens to be a shop in the town where I live that sells homebrew equipment (in addition to other garden-type things) so I drove on over there to see if I could get a replacement spigot for my plastic carboy.  Unfortunately, however, they only carried one plastic spigot in stock, and it wasn’t the right size to fit on the end of my spigot wrench.  Additionally, they didn’t sell any wrenches that would work for me.  Hmmmmmm……..so, what to do?
Well, I made the executive decision right then and there to purchase a glass carboy.  I know, I know, I keep saying I’m not going to purchase a glass carboy until after I move into a new home, but I really didn’t have much choice.  I suppose I could have waited a few days to order a replacement spigot from ECKraus, but time was not on my side and I needed to make a decision immediately.
I’m actually really glad I ended up getting the glass carboy, as now having seen/felt it in person; I really see no reason to wait until I move to have one.  They take up the same amount of space as a plastic carboy, it’s just a little heavier.  I mean, we’re going to be moving an entire apartment into a new house, so what’s a few extra pounds to tote along?
So, long story short, I now have a new glass 6-gallon carboy that my Pinot/Chardonnay is now chilling out in.  The wine kit instructions said to wait until it was clear to bottle, so I went ahead and added some kiesol/chitosan that I had laying around to help it clear a little faster.  It’s been a couple of days now and it’s clearing up a lot—I imagine bottling time will be very soon!  Fingers crossed!