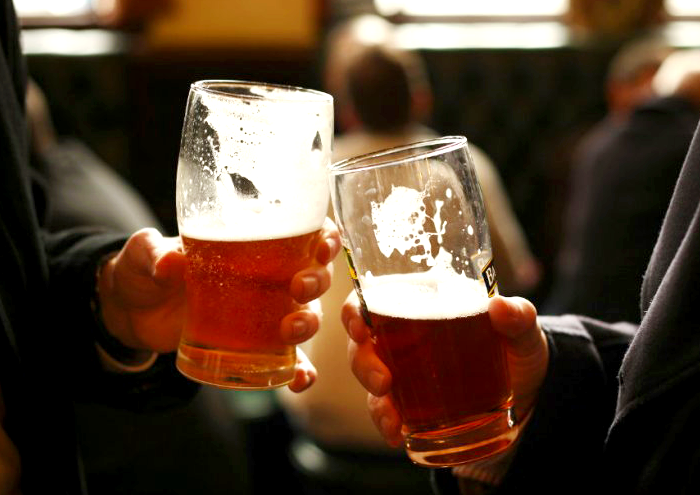 “Session” beers are all the rage these days. Though super high-gravity beers have their place, beer drinkers seem to be trending back to beers that are easily drinkable – something you can enjoy a few pints of without necessarily getting a headache the next day. Such is the case with this IPA session beer recipe.
Homebrewing geeks may be familiar with the beer writer Ron Pattinson and his blog, Shut Up About Barclay Perkins. Ron dives deep into brewing history, going to great lengths to dig up old beer recipes and statistics on how beer was actually made many decades ago. Believe it or not, historical beer recipes didn’t always fit very snuggly into the BJCP Style Guidelines.
This was certainly the case when looking at beer recipes from during WWI and WWII. Such was a time when barley was rationed and brewing ingredients came at a premium. This certainly affected the brewing industry in the UK, where English barley malt was supplemented with imported malts and adjuncts like corn and sugar.
Today’s IPA session beer recipe is modeled after a beer from the Whitbread Brewery of London (Incidentally, Whitbread yeast is derived from that brewery. Safale S-04 is the dry yeast version). The beer has a much lower gravity than what we would normally consider for an IPA, with an ABV of just 4.7%. Still, it’s a bitter beer at 75 IBUs. The use of about 20% simple sugar should make this beer pretty dry on the finish.
Curious what kind of beer people were drinking nearly 100 years ago? Give this recipe a try!
Whitbread 1917 IPA Recipe
(5-gallon recipe, all-grain, via Shut Up About Barclay Perkins)

4.8 lbs. English pale malt
2 lbs. American six-row malt
1.78 lbs. light brown sugar
2.5 oz. Kent Goldings hops at :90 (12.75 AAUs)
1.25 oz. Kent Goldings hops at :20 (6.375 AAUs)
Wyeast 1099: Whitbread Ale Yeast or Safale S-04
All-Grain Directions:
Mash the crushed grains in about 1.5 gallons of clean, chlorine-free water for two hours. Lauter and sparge, collecting about 6.5 gallons of wort in the brew kettle. Bring to a boil and boil for 90 minutes, adding hops according to schedule. Mix in the brown sugar at the end of the boil. Chill wort to fermentation temperature and ferment at 70˚F until complete. Bottle or keg and enjoy!
Partial-Mash Directions: Replace the English pale malt with 3.1 lbs. light dry malt extract. Mash the crushed six-row malt in 2 qts. of water, then sparge. Add enough water to make a 3-gallon boil and mix in the malt extract. Bring to a boil. Increase the 90-minute hop addition to 3.5 oz. and the 20-minute hop addition to 1.5 oz. Continue with the recipe above.
Do you have a IPA session beer recipe you’d like to share? Just post it in the comments section below.
—–
David Ackley is a beer writer, brewer, and self-described “craft beer crusader.” He holds a General Certificate in Brewing from the Institute of Brewing and Distilling and is founder and editor of the Local Beer Blog.