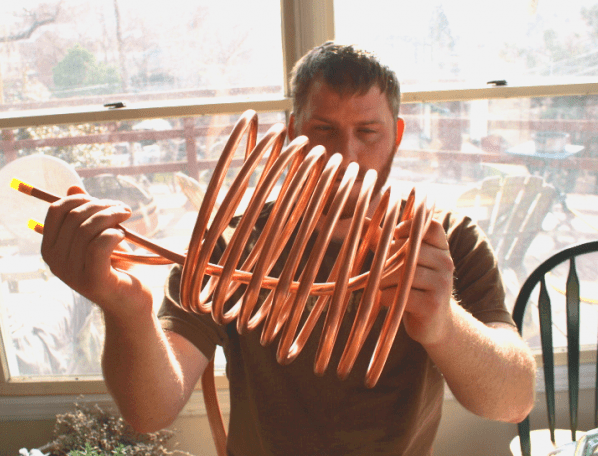 You may have read when learning how to use you immersion wort chiller that there’s no need to sanitize your it since you’re dipping it in near-boiling wort. And this makes sense. I usually do little (if anything) to clean my immersion wort chiller before using it to chill my wort. I usually give it a good rinse after use and let it hang dry til the next time I use it. But I’ve been wondering – is this really the best way to care for an immersion wort chiller? Are there reactions I should be worried about or routine maintenance I should be doing?
Let’s explore the topic of how to care for an immersion wort chiller.
To understand the requirements for maintaining immersion wort chillers, we need to understand their design and what they’re made of and how they work. Most wort chillers are made of copper, though you will encounter wort chillers made from stainless steel. They’re basically a copper coil with vinyl hoses on each end. Some wort chillers can use up to 50 ft. of coil. To rapidly chill your wort, you dip the wort chiller in the wort at the end of the boil, then run cold water through the chiller. As the water passes through the chiller, heat is transferred through the copper coil and pulled away by the water, which can then go down the drain or into your yard or washing machine.
My concern was mostly with the copper portion that comes in direct contact with the wort. Copper is used for wort chillers because it is an excellent material for conducting heat. But copper, though a key part of the human diet, can also be toxic in high amounts. 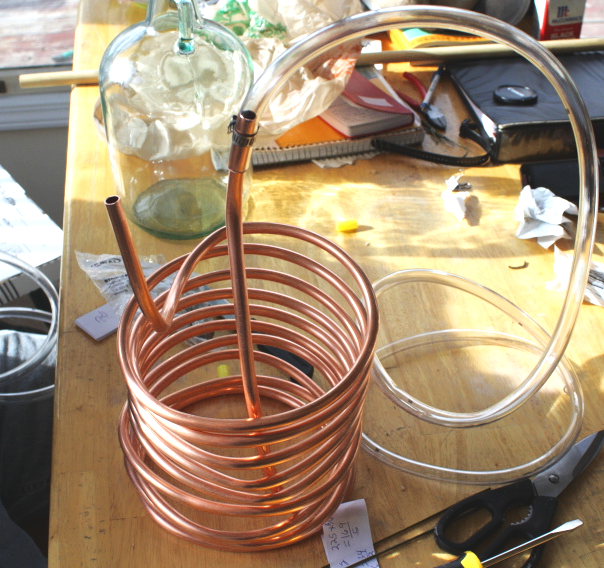 As it turns out, copper develops a protective oxide layer through repeated use. Though a shiny copper coil would look pretty, it’s actually preferable for it to be a dull copper color. This oxide layer helps prevent reactions with your wort. Luckily, even if it were exceptionally clean, the copper wouldn’t react in the wort in such a way to cause any concern. Just leave that oxide layer in place to be safe. This goes for any style of wort chiller, whether it be a counterflow chiller or plate chiller.
What you should keep an eye out for is a blue-green or black build-up on your copper wort chiller. The blue-green layer is called verdigris (it’s what makes the Statue of Liberty green) and it is toxic. That’s not something you want in your homebrew! 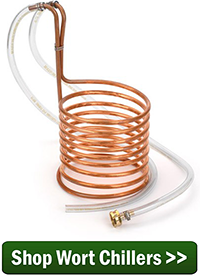 So what’s the best way to care for your immersion wort chiller?

As it turns out, caring for your immersion wort chiller is pretty easy!
If you’d like to learn more about caring for your metallic homebrew equipment, I highly recommend John Palmer’s Metallurgy for Homebrewers article in Brew Your Own magazine.
—–
David Ackley is a beer writer, brewer, and self-described “craft beer crusader.” He holds a General Certificate in Brewing from the Institute of Brewing and Distilling and is founder and editor of the Local Beer Blog.