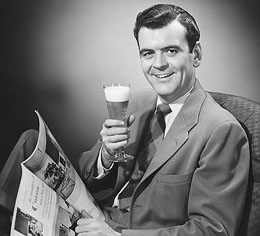 When people are first learning how to brew beer, one of their first questions is always, how long does the homebrewing process take? How long it takes to make the beer, and how long it will be before you can start drinking your homemade beer are two different things. But altogether, from the time you first start mixing your own beer, to the time you’re cracking open your first bottle, it should only be a matter of weeks.
The day you actually mix together your beer yeast, hops, malt extract, and other homebrewing ingredients to actually start making your own beer, you should probably set aside at least four hours to do it, as a first-timer. This will include the sterilization time beforehand and the cleanup afterwards; and it will also get shorter as you start brewing more of your own beer and becoming more experienced at it. But the first few times it can take an entire afternoon or more.
Once the beer has been mixed or mashed, it will then need to sit in a fermenter for about a week. This will give the beer its alcohol content, as well as a certain level of carbonation. You won’t need to do much during the fermentation stage, but you will during the bottling stage, which is next.
Bottling your own beer really only requires a siphoning hose, some beer bottles, bottle caps and a bottle capper, but it does also require about two to three hours of your time. For a 5 gallon batch of homebrew you will be bottling 50 to 55 twelve ounce beer bottles. It’s at this stage that many home brewers are the most impatient so, many choose to keg their beer, instead. This can take as little time as half an hour.
When you keg your beer you also won’t need to let it sit as long before drinking it. While beer needs to sit in beer bottles for a week or two before it reaches full carbonization, kegs can be carbonated in as little as a day.
All in all, from the time you start mixing your own special blend, to the time you’re enjoying a nice cold one, brewing your own beer should take anywhere from three to four weeks.
A great blog post that will give you a little more information on the homebrewing process is, The 3 Different Methods Of Homebrewing. There you will get a good overview of the three basic ways you can approach homebrewing as a beginner, and discover which is the best way for you.