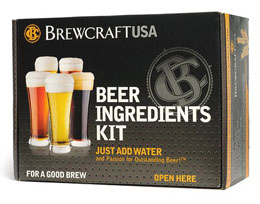 Most people know that whenever you can do something yourself at home rather than just go out and buy it, it’s probably going to be cheaper. But is homebrewing one of those things? And if so, just how much money will you save?
First, consider that if you were to purchase a case of beer from the store, it will probably cost you at least a dollar a bottle and up. If you purchase a smaller pack, the unit price will also go up because manufacturers will typically provide small discounts the more you purchase at once. Those smaller packs can cost anywhere up to $2.00 or $2.50 a bottle.
Typically when brewing at home, you will make about five gallons of beer at a time, which is 54 bottles of beer. The amount you spend on the actual homebrewing ingredients for the beer will vary depending on the kind of beer you want to make; but typically home beer kits can cost between $30 for making a light American-style Pilsner to $60 for your heaviest of Imperial IPA’s. That means that every bottle of beer you make yourself will cost anywhere from $0.56 to $1.12 per bottle. And for those that are keeping track, that’s half the cost of even the best-discounted cases of beer you’ll find in any store.
Making your own homebrew with a homebrew ingredient kit will always be a cheaper option than buying a comparable beers at the store, but there are much bigger advantages to brewing yours too. Namely, the sheer satisfaction you’ll feel the first time you crack open a bottle of your very own blend – and every time after that, too. While there are many cost-saving benefits to brewing your own, home brewers quickly forget them after realizing all the other benefits that go along with it! So if you want to save a buck, okay brew some beer, but if you want to have some great tasting beer and have some fun in the process, okay brew some beer!
Here’s another blog post that will help you figure out how to get started: The Minimum Equipment You Will Need To Brew Beer Yourself. The post talks about the homebrewing equipment you will need to get you going.