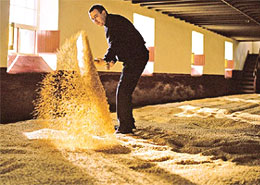 Malt is the backbone of your homebrew. Not only does it contribute flavor to your beer, but it’s also responsible for fermentable sugars, color, aroma, and mouthfeel. Below are a number of terms used when talking about malt and how it’s made: