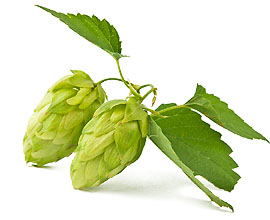 The term ‘noble hops’ is very frequently used in beer making and refers to four varieties of hops that were originally cultivated in Central Europe. These four varieties share a set of common characteristics as they are highly aromatic and have very low alpha bitterness. Humelene or hop oil is abundant in these hops. This humelene is often used in the production of perfumes as it gives a woody, herbal, and robust aroma. However, it is extremely susceptible to breakdown due to heat, light, and oxidation, and hence beers containing noble hops must be properly stored.
Because the alpha acids are very low in noble hops, they make the brew bitter and add an aroma, but at the same time they do not make it harsh. They have very low amounts of acids that are harsher in taste such as beta acids. Conditions and soil during growth lend their characteristic properties to theses hops, hence only hops grown in a particular region are known as noble hops.
There are basically four varieties of noble hops:

All these four noble hops are rich in aroma.  What is your favorite variety of noble hops?  What do you use for your homebrew recipes?