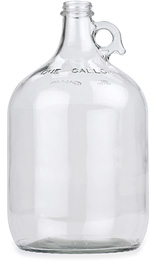 When it comes to bottling homemade wine, we often get questions about using gallon glass jugs in place of the standard 750ml wine bottle. Some winemakers like the idea of using jugs simply because it is less work. If you have 5 or 6 gallons of wine, just put it in 5 or 6 one gallon jugs and be done with it.
I can tell you that bottling homemade wine in gallon jugs is perfectly okay. The wine will keep just as good as if it were in wine bottles. Not an issue at all.
Where the problem can rise is when it comes time to decant the wine. Having leftover partial containers of wine whether it be in glass jugs or wine bottles is not a good thing. The size of the container needs to be appropriate to the amount of consumption unless you have a wine preservation system of some sort.
Air is a big enemy to a still wine. Over time air will allow the wine to oxidize and eventually spoil. We’ve all put a half bottle of wine in the refrigerator and been perfectly happy with it later on, but this habit can only be taken so far. If done again and again with the same gallon an overall degradation of the wine will begin to be noticeable.
Long story short, using gallon jugs is perfectly fine for bottling your wine, however you should only do so if you plan on drinking that gallon in two or three days or if you have a wine preservation system. Having air in with the wine for longer than this will only be a negative for the wine not a plus.
———————————————————————————————————
Ed Kraus is a 3rd generation home brewer/winemaker and has been an owner of E. C. Kraus since 1999. He has been helping individuals make better wine and beer for over 25 years.