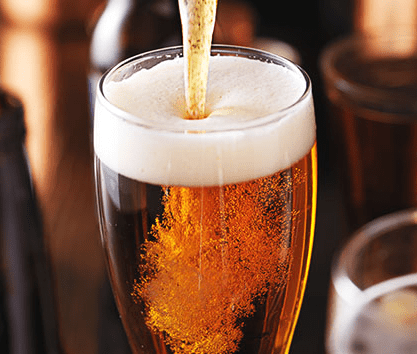 Professional brewers often filter their beers to make them clearer, but homebrewers can also achieve clarity without a filter. Enter: beer finings.
Using finings in beer will give it a brilliantly clear appearance. While clarity may not affect a drinker’s perception of aroma or flavor, appearance makes a key first impression when evaluating your homebrew.
Home brew beer finings work by electromagnetically attaching themselves to some of the materials which cause haze: protein, yeast, tannins. Sounds pretty science-y, I know, but you don’t need a Ph. D. to make clear beer! Here’s some basic instructions on using homebrew fining agents.
When considering different beer finings, there are two types: kettle finings and finings added to the fermenter. Both types may be used in combination within the same brew, but you may find that one or the other is adequate for your needs. Using three different finings in your beer is probably not necessary.

Since Irish moss is negatively charged and the collagen finings are positively charged, you may find that using them both produces good results. When using finings in beer, be sure to follow the instructions on the package and mix the fining agent appropriately. There’s no need to use more than is recommended by the manufacturer.

Other Tools for Clarification
If using finings in beer is something you are hesitant to do, you can still clear your beer with other methods:

Remember that some beers are supposed to be cloudy, in particular, hefeweizens and witbiers. You may wish to omit using finings in such beers. But for your pale ales, porters, and lagers, a bit of home brew beer finings may be just what you need for a crystal clear brew!
—–
David Ackley is a beer writer, brewer, and self-described “craft beer crusader.” He holds a General Certificate in Brewing from the Institute of Brewing and Distilling and is founder and editor of the Local Beer Blog.