Blogger Bill Downs introduces us to the opponents in the opposite corner of the homebrewing ring: the microbes that can spoil you beer!
—–
I remember my first beer very well. It was an extract kit with a pound of grain, sometimes called a partial mash. It was a stout and a good one.
What did I do right? In spite of being under-equipped and inexperienced, I did some things right. I followed the directions in the kit to the letter, and the most important thing I did was to make sure everything was sanitized! Why?
There are two natural spoilers that are guilty of causing homebrew contamination:

Wild Yeast Contamination:
Let’s examine this with a little more detail starting with wild yeast. When it comes to homebrew contamination, there are two broad types of wild yeast:

There are some types of non-saccharomyces yeasts, such as Brettanomyces bruxellensis (Brett for short), that are intentionally allowed in some types of beers. An example of this particular yeast is what you find in Lambic style beers. The smell of “sweaty horse blankets” is a common smell that comes from Brett. 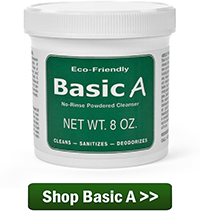 As a rule however, you never want this type of yeast in beer. Not only does non-saccharomyces strains cause off-flavors, some brewers will tell you they are almost impossible to clean off of equipment (especially plastic) and it will continue to taint all your beers with off-flavors. That depends on whom you ask, but some breweries take it seriously enough to use separate equipment for their Brett beers.

Bacterial Contamination:
Here are some details about homebrew contamination through bacterial infection. There are six basic types of bacteria brewers need to watch for. These are:

All these bacteria can be found in raw homebrewing materials such as grain, hops, additives, vessels, tubes and other brewing equipment. This is why cleanliness and sanitation are next to beer Godliness!
But, don’t let this scare you! Here is all you have to know to completely avoid any type of homebrew contamination:

If you do these things, there is no reason to worry about wild yeast or homebrew bacterial contamination. Or as Charles Papazian would say, “Relax, don’t worry, have a homebrew!”
—–
In 2000, after a lot of reading and research, Bill Downs started homebrewing. He founded, and then became the president of his local homebrew club, the Mesa Verde Mashers. Bill is a contributing reporter for the Rocky Mountain Brewing News, a BJCP Beer Judge, and owner and webmaster of www.homebrewingnews.com.