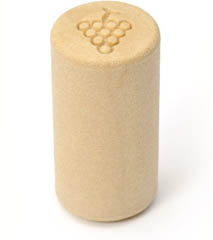 More and more often, when you go to decant a bottle of commercially made wine, it’s going to be a synthetic cork that pops out. The numbers are hard to pin down, but best estimates guess that roughly 9% of all commercially corked bottles of wine in the world today are corked with synthetic corks, and these numbers appear to be on the rise.
Global wine sales have been on the rise as well. For several decades the wine market has seen an increased demand for its product. So much so, that the supply of natural cork has not been able to keep up. Every year more and more wine is being bottled, and every year more and more cork bottle stoppers are needed to close them.
The primary reason that the supply of cork has gotten behind the demand is because it is a natural product. It’s actually the bark of the ‘cork oak’ tree. Every so many years this freakishly thick looking bark is stripped from the trees and then processed into the shape of a cork bottle stoppers. Eventually, the bark grows back on the trees, and the process is repeated all over again—a cycle that takes about 7 years.
This process of ‘strip the bark and repeat’ is all well and good for the current demand, but when you have new demand on top of that, you have to plant more cork trees. This is where the cork market has gotten itself out of balance.
It takes on average 25 years for a cork tree to grow and to mature into an actual cork producer. This is a length of time that would be considered to be way out on the horizon in any industry.
So in effect, the cork producers are being asked to predict the future further than a generation down the road. By putting yourself in their shoes, you can begin to imagine how difficult it would be to know when and how many trees to plant. This is the equation that has allowed the cork stopper producers to be caught flat-footed.
This is part 1 of a 4 part series. In the next post (part2), we will cover how this lack of supply spawned the emergence of synthetic corks.
———————————————————————————————————
Ed Kraus is a 3rd generation home brewer/winemaker and has been an owner of E. C. Kraus since 1999. He has been helping individuals make better wine and beer for over 25 years.

0 thoughts on “THE SYNTHETIC CORK SERIES:Part I: Why Are Synthetic Corks Becoming So Popular?”