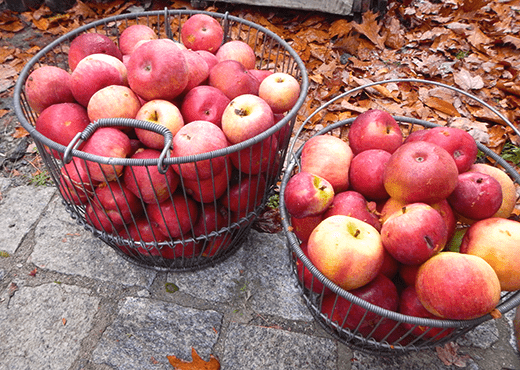 One of the benefits of joining a homebrew club is that you’re often exposed to group events and discounts. My local homebrew club does an annual cider pressing at a local cidery. This year I picked up five gallons of juice. Here’s my game plan for making hard apple cider.
From my five gallons of apple juice I want to make three different hard ciders: one plain, one with hops, and one with fruit and/or spices. I plan to ferment the five gallons together, then split them up at secondary fermentation into three different fermenters: one three-gallon glass carboy and two one-gallon glass jugs. (I already have the appropriate bungs and airlocks from previous experiments.)
As for the other ingredients, I opted not to use any additional sugar at this time. Upon recommendation from a friend, my yeast of choice making these hard apple ciders was Wyeast 1098: British Ale Yeast.
The first step when making hard cider from soft (non-alcoholic) cider is to stabilize the juice. One dilemma I had to sort through was how to stabilize the juice.
Campden Tablets vs. Pasteurization
Last year, I tried making hard apple cider using the standard method of adding Campden tablets to the juice. The Campden tablets stabilize the juice by releasing sulfur dioxide, which kills off any microbes that my have been living on the fruit. Yes, it smells a little like rotten eggs, but none remains at the end of the cider making process. Typically, the cider maker will add one tablet per gallon of juice, wait 24 hours while it does its thing, then pitch the yeast. 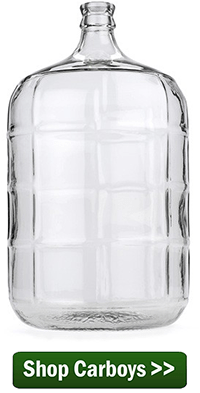 For some reason, this didn’t work out for me last year. Either the juice was especially funky, or I left the apple cider in the primary fermenter for too long and with a more head-space than it should have had. The cider got moldy and I had to dump the whole thing.
This year, I’m doing things differently. In an attempt to prevent infection, I’m pasteurizing the juice. Yesterday afternoon, I picked up the juice. Last night I pasteurized the juice by heating it to 180˚F. Why 180˚F? 180˚F is hot enough to kill off wild microbes, but not quite boiling. Boiling the apple juice could result in a pectin haze. The pectin haze wouldn’t affect flavor, but I’d like to get a clear cider if I can. (I may still end up with some haze. In this case, pectic enzyme could come in handy.)
In theory, this pasteurization process should have killed off any yeast or bacteria that may have been living on the apples. During this run of making hard apple cider I had been thinking about adding sugar to boost the potential alcohol content, but my hydrometer showed the juice had a specific gravity of 1.050. Since apple juice will usually ferment completely dry, this should come out to about 6.5% ABV. That’s right where I want it, so no sugar needed.
Yeast Nutrient for Hard Cider
I added 1 tsp. of yeast nutrient per gallon of juice. I mixed this in while pasteurizing the juice.
Yeast Starter for Hard Cider

While pasteurizing the juice (see above), I pulled off a half gallon for use in a yeast starter, pasteurized it separately, cooled it down and pitched the yeast. This gave the yeast a couple hours to grow and multiply before being pitched into the main batch. That’s not much of a head start, but it’s better than nothing.
I’m no cider master, but I have a good feeling about where this one is headed. I’m learning that making hard apple cider may not be as difficult as I first had suspected. Today, it’s fermenting away at 68˚F!
Stay tuned to see how it turns out!
Series: Part 1 | Part 2 | Part 3
—————————————————————————————————————–
David Ackley is a beer writer, brewer, and self-described “craft beer crusader.” He holds a General Certificate in Brewing from the Institute of Brewing and Distilling and is founder of the Local Beer Blog.