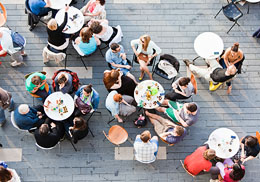 Beer blogger Heather Erickson shares why you should join a home brew club ASAP:
—————————————-
If craft beer were a rock band touring the country, home brewers would be its groupies. When groupies get together, well, you have a fan club. Enter the Home Brew Club: a place where home brewers can meet to collaborate, drink, and compete.
So why should you look up your local home brew club as soon as you finish that beer? Well, home brew clubs are great opportunities to…
1. Drink Together
At the very least, being a part of a home brew club gives you license to do just that: drink. Monthly meetings centered around learning about different beer styles or sharing your own home brew will need to be enjoyed. You will need to drink together in order to compare beers, identify tastes, and figure out beers that you might want to brew as a club. It’s also fun picking up several bottles of the same type of beer, including a home brew version, to see how yours stacks up against the pro’s.
2. Collaborate and Brew Together
Nothing is more fun than creating a beer recipe with friends – well, except maybe drinking the end result. Working on a group recipe, using the expertise of all members, is not only a team building activity, it gives you something to brew and ultimately drink together.
A home brew club in my area makes a plan to brew as a group once a month. Sometimes it is a clone recipe. Sometimes it is a favorite beer recipe from a member. Other times it is a group created recipe. No matter what they choose, brewing with others that love to brew makes the time fly by.
3. Compete Together
Let’s be honest. Home brew competitions can be a bit scary. Filling out the paperwork, dropping off the brew, and waiting for the results can just about put anybody into a frenzy. Why not compete with friends? Make a plan to enter either individual beers or club created beers with fellow members. That way, no matter what the outcome, you will have your own cheering section.
4. Learn Together
One of my favorite home brew learning experiences was at the National Homebrewers Conference last summer. It was unlike anything I had ever been to before. Filling conference rooms with fellow home brewers learning about new techniques, the science of beer yeast, and individual styles was so fun. Instant friendships were made based on the passion to learn more about our common language of beer. While it might not be feasible for your club to travel to such a conference, check out the AHA website to see what kind of online courses or web seminars are available. Local home brew shops might also offer some classes that your club could attend.
At the end of the day, nobody can deny that beer is social. Shouldn’t your home brewing adventures be, too?
———————————————————————————————————–
Heather Erickson is a homebrewer with three years experience and has competed in the GABF Pro-Am Competition. She writes the blog This Girl Brews and is a regular contributor to homebrewing.com and kegerators.com. Find her on Twitter at @thisgirlbrews.