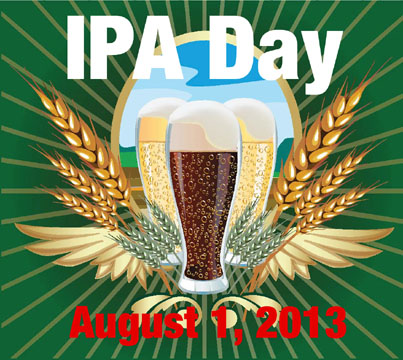 IPA Day is August 1st, a celebration of hops and quite possibly America’s favorite craft beer style.
As many hopheads have heard, India Pale Ales were invented during the colonial days of the British Empire. In order for the beer to survive the journey to their troops in India, British brewers would add extra hops, a natural preservative, and increase the alcohol content. Americans, as we always like to do things bigger and better, have added our own American ingredients and adopted the style as our own. It’s not uncommon to see “Imperial” and “Double” IPAs, amped up versions of the original, as well as “Belgian”, “white”, and “farmhouse” IPAs on the shelves.
Here are five ways to celebrate the big, bold flavors of the India Pale Ale:

Are you planning an IPA Day event? Register the event through CraftBeer.com so others beer enthusiasts can join in the fun as well.
Til next time…cheers!
—————————————————————————————————-
David Ackley is a beer writer, brewer, and self-described “craft beer crusader.” He holds a General Certificate in Brewing from the IBD and is founder of the Local Beer Blog.