From the incredible prices being cried out at a Sotherby’s wine auction, to the fluffy articles that float around in today’s life-styles magazines, people are continuously being fed the notion that the older the wine is, the better it will be.

But is older wine better? Unfortunately, the answer is maybe – maybe not! The ol’ mantra: “the older the wine the better”, is just that – a mantra. It’s a generalization that is just as likely to be false as it is true. The reality with any wine is that there will always come a time when it would be best to drink up!

Wines don’t endlessly increase in quality like an investment fund or like a home increases in value. They have a life cycle, a beginning and an end, much like any living thing. At first, there is a steady rise in quality; then a flattening out, or plateauing; and eventually a long, slow decline.

The aging cycle of a today’s commercial wines are fairly well mapped and predictable. Some wines have very long life-cycles, involving many years, even decades. Then there’s other wines who’s aging potential is not so long. Based on the type of wine, how it was made, combined with an observation 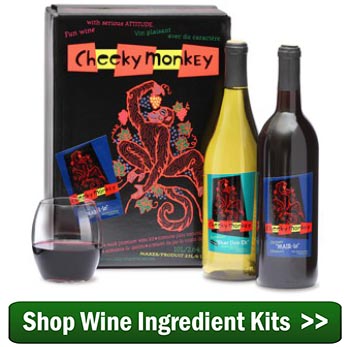 of its character at bottling, a timeline can be laid out by the winery that shows the optimum time to drink that particular wine. Once this theoretical point is reached, any additional aging is futile. In fact, too much aging beyond that point will result in a very slow decrease of the wine’s quality.

The very same holds true for homemade wines. There will come a point in each wine’s life when more aging will not be a good thing. Holding on to it will only provide you with less and less quality as time goes on – a direct mocking of the phrase, “the older the wine the better”.

The whole point of bringing this to light is that some home winemakers get into the game of saving their wines instead of drinking them, putting bottles away like heirlooms, thinking they’re going to become more exceptional as time goes by, saving them for their granddaughter’s wedding and all, but in reality this is little more than a waste of good wine.

By all means let the wine age. It my take 3 months. It might take 3 years. Every so often pull a bottle out and see how it is doing. Is it becoming more mellow? Is it developing any complexities or layers of flavors? If yes, then great, let the wine age a little longer. But when no improvement can be detected between samplings, then simply put, it’s time to start drinking.
—–
Ed Kraus is a 3rd generation home brewer/winemaker and has been an owner of E. C. Kraus since 1999. He has been helping individuals make better wine and beer for over 25 years.

8 thoughts on “Is Older Wine Better?… Not Necessarily!”