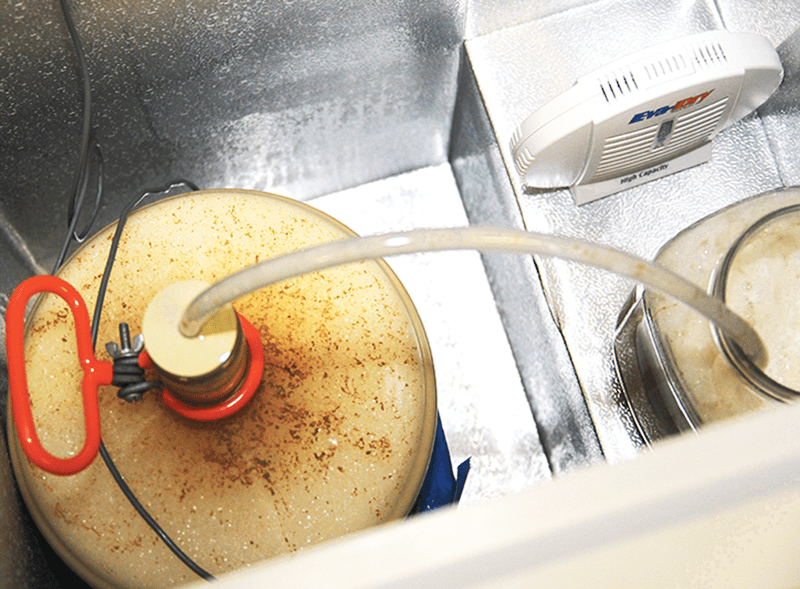 If you’ve been homebrewing for a while, chances are you’ve had a foamy fermentation bubble up through your airlock, maybe even blow the lid right off your fermenter! This is the time you wished you used a blow off tube.
The foam on top of your fermenting beer is often called “krausen”. It’s a mix of very active yeast, gummy protein, and hoppy trub that rises and falls over the course of several days. Anytime you anticipate an extra vigorous fermentation, such as when brewing high-gravity beers or fermenting at higher temperatures, you might want to rig up a blow off tube setup.
If you’ve been on many brewery tours, you may have noticed the hoses that run from the fermenters into a big bucket of sanitizer solution. The bucket may or may not be actively bubbling. It may even be spilling over with yeasty trub! Below is some information that will show you how to make a blow off tube for the homebrew setup.
The mechanism is basically a large airlock system. It allows CO2 to escape from the carboy or bucket fermenter, while also providing an exit for any yeasty krausen, which will get pushed into the bucket of sanitizer.

To make a blow off tube setup, you will need:

How to Make a Blow-Off Tube

More often than not, you’ll probably have to rig up a homebrew blow off tube as the

foam is already flowing out of the airlock and all over the floor. Just keep your cool, clean the mess, and remember to sanitize. With all that stuff coming out of the fermenter, there’s probably not much that’s going to get in.
A homebrew blow off tube setup can be a lifesaver when fermentation gets out of control. To avoid a blow-off disaster, leave about a gallon worth of headspace during primary fermentation to give the krausen room to grow. Be sure to check on your fermentation over the first few days and have your blow off tube ready!
So that’s the basics of how to make a blow off tube. Do you use a homebrew blow off setup? Do you use it all the time or only when you need it? Share in the comments below!
—–
David Ackley is a beer writer, brewer, and self-described “craft beer crusader.” He holds a General Certificate in Brewing from the Institute of Brewing and Distilling and is founder of the Local Beer Blog.

4 thoughts on “Homebrew Hacks: The Art of the Blow Off Tube”