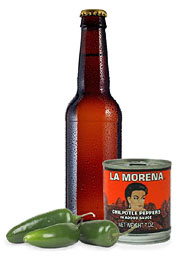 Are you ready for some fire?
If you’re a fan of spicy foods, you might want to try to brew a spicy beer made with hot chile peppers. It’s definitely a specialty item, but sometimes that extra kick can give your tastes buds a much needed wake-up call.
Not sure if spicy beer is for you? Try some commercial examples before brewing your own hot chile pepper beer. Twisted Pine’s Ghost Face Killah, Rogue Brewery’s Chipotle Ale, and Dogfish Head’s Theobroma are all made with hot peppers and are pretty well regarded among craft beer fans. Levels of spice will vary from beer to beer, but if you can stand the heat, keep reading.
Brewing beers with unusual ingredients may sound intimidating, but it’s actually pretty easy. Here are some instructions for brewing your own Chipotle Smoked Porter, inspired by Stone Brewing Company’s Chipotle Smoked Porter. Feel free to substitute the base beer or switch type of pepper to come up with your own variation!

Spicy beer is definitely an acquired taste — be prepared because not everyone will like it. I for one love these chipotle smoked porters, so I think it’s worth a shot.
Have you brewed chile beers before? What peppers did you use? What base style?
——————————————————————————————————-
David Ackley is a beer writer, brewer, and self-described “craft beer crusader.” He holds a General Certificate in Brewing from the Institute of Brewing and Distilling and is founder of the Local Beer Blog.

0 thoughts on “How To Brew A Chipotle Smoked Porter”