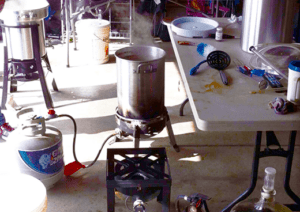 Many homebrew retailers will tell you that you can save money by homebrewing. But is this really the case? How much does it really cost to make your own beer? Let’s crunch some numbers.
The typical homebrewer brews enough beer to produce about five gallons. Account for some loss, and let’s call it eight six-packs. That’s a lot of beer! What does it cost to buy a six-pack of a typical pale ale? It varies depending on the brand and the retailer, but let’s call it $10, or $80 for eight six-packs. Maybe less if you buy a twelve-pack here and there. Depending on your state, tax can add a nice chunk too.
A pale ale recipe kit on the other hand, such as the Steam Freak “Bazz” Pale Ale, costs just shy of $35. Of course there’s shipping to account for, but buy two or more and the price goes down to under $32 per kit, plus you qualify for E. C. Kraus free shipping. Now we’re talking! As you can see it really doesn’t cost that much to make your own beer.
Shop smart and you could be in for some serious savings over buying your beer from the store. Compare it to the amount you’d spend at the local pub…you can save a lot by homebrewing!
The challenge comes in when we start adding in the variables, such as equipment. Our Beer Makers Necessities Kit runs for just shy of $130, but includes your first ingredient kit and free shipping. It’s an up front investment, so the more your brew, the less it costs per batch. There are other costs that are spread out over time, such as cleaner and sanitizer, but their per-six-pack cost is pretty minimal (at most a dollar or so per gallon of beer).
Beer blogger Bryan Roth (who you may remember from his guest post titled Malt, Hops, and Zen) explores this question on his personal blog, This is Why I’m Drunk. He was kind enough to compile some data on the costs of his beer recipes and then compare them to their commercial equivalent:

*Watermelon wheat yielded 50 12-ounce bottles due to use of watermelon juice, which increased overall amount of liquid

As Bryan points out, between equipment purchases and the time involved in brewing, we’re probably breaking even. The thing is, we brew because we love it, and for a number of other good reasons, too. How else do you explain that there are now over 1 million homebrewers and nearly 1,500 homebrew clubs in the United States? I for one will personally guarantee that if you pick up the hobby of homebrewing, you’ll feel all the richer because of it.
—————————————————————————————————–
David Ackley is a beer writer, brewer, and self-described “craft beer crusader.” He holds a General Certificate in Brewing from the Institute of Brewing and Distilling and is founder and editor of the Local Beer Blog.