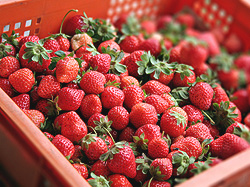 One of the impressions that many people have about the steam juicer is that it is slow. I know, because I was one of them. Then I had the pleasant opportunity of actually working with one at great length over at a friend’s house recently, and here’s what I learned.
One of the reasons the steam juicer ‘seems’ so slow is that you need to bring the water in the base water pan to a slow boil before any of the real progress begins. This is a little time consuming, particularly if your just doing a single load of fruit. But once you get the stove heated-up, the water boiling and the ambient temperature of the steam juicer up to full-steam, it really does a pretty fast job.
We were doing strawberries. We had about 40 pounds and was able to completely juice them in a little over three hours. Now mind you there was two of us, so we were able to keep things moving along, but I could see a person by themselves doing 40 pounds in less than 4 hours, anyway.
One of the little tricks we came up with was to keep a second pan of steaming water ready at all times that way when the steam juicer’s water pan started to go dry we’d have steaming water to fill it up again. This allowed the steam juicer to keep rolling right along with little downtime.
All in all we had a lot of fun using the steam juicer and not only did I help my friend make some strawberry jelly (which I hope to get some if your reading), but I also was able to get some perfectly clear strawberry juice out of the deal for making some strawberry wine.
———————————————————————————————————
Ed Kraus is a 3rd generation home brewer/winemaker and has been an owner of E. C. Kraus since 1999. He has been helping individuals make better wine and beer for over 25 years.