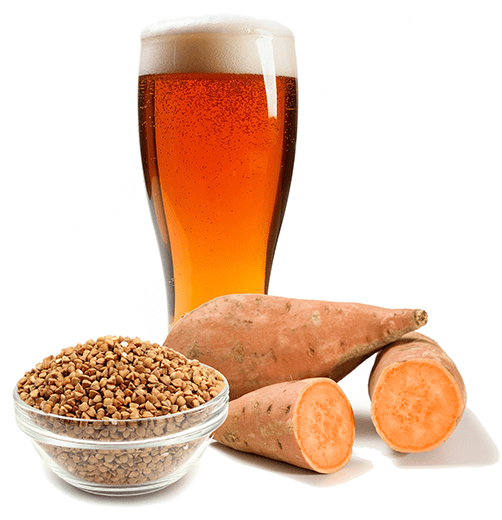 As I’ve mentioned before, my significant other has a gluten allergy. She actually cried when she called to tell me the diagnosis, upset that we wouldn’t be able to share beer experiences anymore. Fear not, I told her. We’ll find a way.
This has led me to experiment with gluten free homebrewing and a number of unusual gluten free beer recipes. The latest: a sweet potato buckwheat ale. Allow me to share with you how it went.
Malting the buckwheat
In my other life as an artisanal maltster, I came into a substantial amount of buckwheat, and I did what any artisanal maltster/homebrewer would do: I malted it to make beer out of it!
After a few small germination tests, I steeped the buckwheat in water three times for a total of about 30 hours. Around the end of the steeping process, small white shoots starting growing out of the pointy end of the buckwheat kernel. When making malt from any grain, this is a sign that changes are starting to take place within the kernel, breaking down the cellular structure and activating valuable enzymes. Though only about 40% of the buckwheat actually germinated, I made a note and proceeded.
After four days of germination, I washed the buckwheat and allowed it to dry, then placed it in the oven on the lowest temperature setting I could (170˚F). It took several hours to dry completely. It might have dried faster with regular stirring or a perforated dish that would allow the air to circulate.
Mashing the buckwheat and sweet potato
Once the malted buckwheat was dry, it was time to brew. From my other experiences with gluten free beer recipes and cooking, I knew that combining multiple starches tended to produce the best results. I’d heard of sweet potatoes being used in beer before, so I thought I’d give the combination a try.
Now I had read that sweet potatoes have a fairly high gelatinization temperature, so combined with the low germination of the buckwheat, I decided to use a three-step decoction mash to maximize my fermentable sugars. After milling the buckwheat and roughly chopping the sweet potatoes, I covered them with water and brought the temperature up to 120˚F. I removed about 1/3 of the mash, brought it to a boil, and then mixed it back in to the mash. I repeated this a total of three times. I then strained out the wort and lautered to collect about two gallons of wort.
I was a little disappointed to find my pre-boil gravity was only 1.020. I believe this was in part due to the low germination of the buckwheat, and partly due to a lack of extraction from the sweet potatoes. If I were to repeat the experiment, I would probably bake the potatoes and mash them before adding them to the buckwheat mash. To compensate for the low gravity, I added eight ounces of molasses to the wort that I collected in the kettle.
The boil
To get a good sense of the buckwheat/sweet potato qualities, I decided to moderately hop the beer with Willamette hops. They’re a good go-to hop for pale ales, brown ales, and a number of other beer styles, without being over the top in any one particular flavor quality. I did equal hop additions at :60, :20, :10, and :5. Because it’s generally good policy, I also added Irish moss and yeast nutrient at :15.
Fermentation
For yeast, I chose a dry American ale yeast for this particular gluten free beer recipe. It’s what I had on hand, easy to use, and fairly neutral in flavor. Again, the point was to allow the sweet potato and buckwheat come through.
So how did it turn out?
I had one today and it actually came out pretty tasty! Most importantly, the girlfriend likes it!
The beer pours a burnt amber color, somewhat cloudy, with a full, creamy head. To be sure, it doesn’t taste like a normal amber ale or pale ale. It has a distinctive buckwheat/sweet potato profile. The buckwheat flavor is somewhat sweet, somewhat nutty. (If you’ve had buckwheat pancakes before, you know what I’m talking about.) The hop bitterness is well balanced. There is the slightest tang on the finish, which I’m guessing comes from the molasses.

0 thoughts on “Gluten Free Beer Recipe: An Experiment With Sweet Potatoes And Buckwheat”