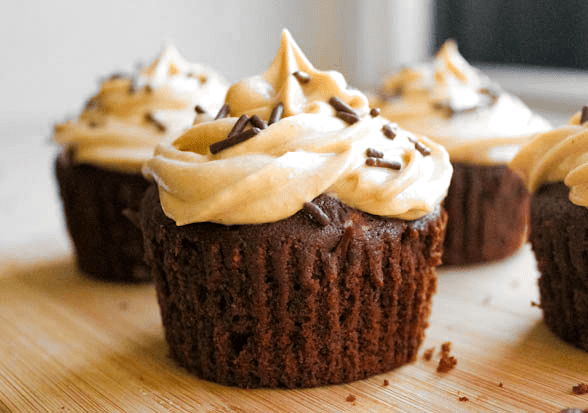 There are lots of culinary uses for beer: marinades, soups, sauces, baking, cocktails. Cooking with beer is just one more way to bring creativity into your homebrewing hobby. A few years ago, I discovered a recipe for some the most decadent cupcakes I’ve ever had – and they just happened to be made with beer!
For this recipe, most any dark beer will work, though I’d avoid anything with an excessive amount of hops, since the bitterness can come through in the food. For example, I wouldn’t try this with a black IPA, but a milk chocolate stout, a coffee stout, or even Guinness would work great. Another fun commercial beer option is Terrapin’s Moo-Hoo Chocolate Milk Stout.
The recipe below comes from the Food Network, but I’ve made a couple changes. In particular, I reduced the powdered sugar in the icing from 1 lb. to 3/4 lb. Don’t worry – these cupcakes are still plenty sweet!

To make the cupcakes:

To make the icing:
* The icing can be made in advance and kept covered in the refrigerator.

To serve, top each cupcake with frosting and dust with cocoa. If you’re feeling extra naughty, serve with a glass of your homebrewed stout!
Do you ever cook with your homebrew? What do you like to make?
———————————–
David Ackley is a beer writer, brewer, and self-described “craft beer crusader.” He holds a General Certificate in Brewing from the Institute of Brewing and Distilling and is founder and editor of the Local Beer Blog.