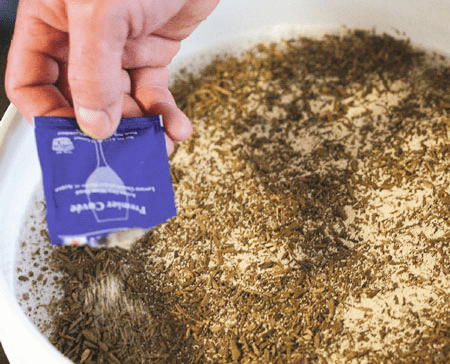 One of my wine making kits seem to be slow in starting & after a few days, we added another yeast pkg. to the wine……which finally begin activity. With 2 wine yeast pkg. Was it OK to add another package? Can you add more yeast to a wine? Will the wine have a yeast taste?
Thank you
Chris D.
—–
Hello Chris,
Whether you use one, two or even three packets of wine yeast, it will not have a direct impact on the flavor of the wine.
The reason for this is when a single packet of wine yeast starts to ferment, it first goes through what is know as an aerobic stage. This is when the yeast begin to multiply themselves into larger numbers. This aerobic phase will typically increase the cell count of a single packet by about 150 to 200 times.
This explosive growth of yeast cells is what eventually causes a significant amount of the sediment you typically see at the bottom of your carboys.
If two packets of wine yeast are added, it will not cause double-the-volume of yeast, but it will make a little more than one packet would, but only marginally so. In either case, the yeast cells will all drop out when they are finished fermenting. If the fermentation goes correctly, all the yeast will eventually be removed, regardless.
But having said this, you should have only needed one packet of yeast in the first place. The fact that a second packet caused the fermentation to take off would be an indication of one of three things:

Number 3 is by far the most common reason we see a fermentation not starting. Regardless of the reason, its always okay to add more yeast. You can add more yeast to the wine without causing unwanted results. Just realize that it is not usually a solution to the problem. You also have to be aware of other factors that can interfere.
One thing you could do when a fermentation is not starting as planned is to run through the, Top 10 Reason For Fermentation Failure. These 10 reasons cover over 95% of the stuck fermentations we see.
So as you can start to see, you can add more yeast to a wine; the point is, you shouldn’t have to!
Happy Wine Making,
Ed Kraus
———————————–
Ed Kraus is a 3rd generation home brewer/winemaker and has been an owner of E. C. Kraus since 1999. He has been helping individuals make better wine and beer for over 25 years.

0 thoughts on “Can You Add More Yeast To Wine?”