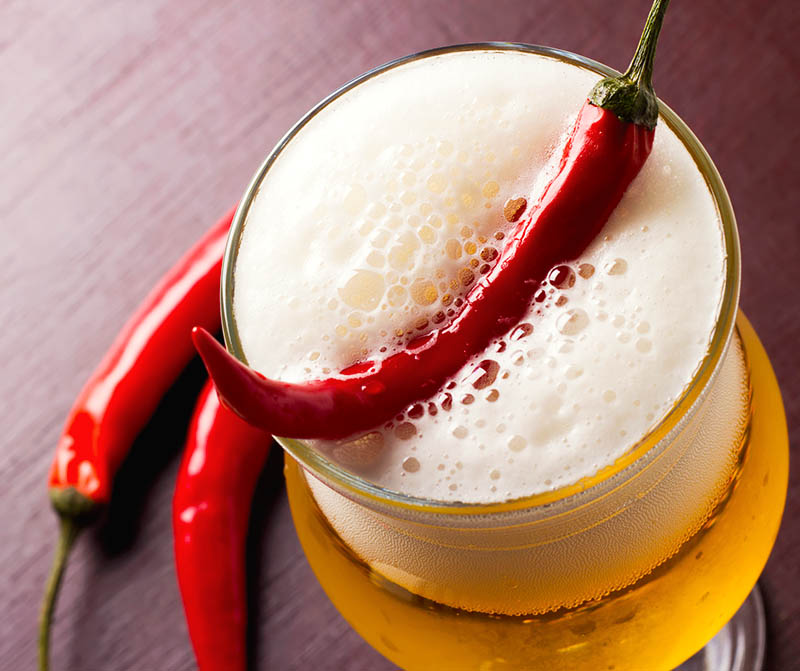 Beer drinkers are an eclectic bunch. Some are hop-heads and some prefer malt bombs, but mixed in with the plethora of sects is a smaller group – those who like it hot.
You may have noticed commercial breweries experimenting more by brewing with chili with peppers, recently. Stone has the painfully hot Crime and Punishment and Twisted Pine has the infamous Ghost Face Killah. But there’s no need to go to the extreme with your homebrew!
If you’re looking for unique heat or some layered vegetable flavor, there are lots of ways to go about adding chili peppers to your beer – and lots of peppers to use – when brewing with chili peppers.

What Kind of Homebrew?
Before you find the kind of pepper you want to use, it’s important to determine the style of homebrew you’d like to make. The homebrew you use as your base beer will help you pick what kind of chili peppers to use and how much heat you want to feature.
For example, you could brew something light, like a lager, which could help really showcase aspects of a pepper, all the way up to a stout, which can balance the spice and heat with its own sweet maltiness and roasted characteristics. Here’s a chipotle porter recipe as an another example.
The first time I tried brewing with chili peppers I used a blonde ale base because I wanted the pepper to be front and center. It was perfect for my love of hot food, but a little too much heat came through for other drinkers. Find a style that you enjoy and that will allow you to feature the right amount of heat.

Which Peppers to Use?
Once you’ve got a beer style picked out, consider these three popular chili peppers to reach your desired level of intensity:

When to Add Chili Peppers to a Brew

Like other unique ingredients (such as herbs and fruit), you’ve got options for when to add peppers in your homebrew. You can leave them whole if you want to minimize heat or slice them in half to expose seeds and the vegetable’s membrane, which contain capsaicin, the compound that makes a pepper hot.
Other timing options when brewing with chili peppers:

How Adding Chili Peppers Impact Your Homebrew
When brewing with chili peppers you’ll definitely get a pepper flavor in your beer, but it’s important to know that how you use peppers may also affect the head retention of a beer.
If you’re using seeds and other exposed parts of the chili pepper, oils from the vegetable may seep into your beer, greatly reducing head retention. In my experience with a jalapeño blonde ale, carbonation wasn’t a problem, but little to no foam remained in my glass a few minutes after it was poured.
Think you can stand the heat? A good place to start for first-timers is with selecting a homebrew recipe kit. Find a brew you like and think will support the pepper heat and give it a shot. It’s an easy way to test pepper flavors and discover the kick they can add to your homebrew!
—–
Bryan Roth is a beer nerd and homebrewer living in Durham, North Carolina. You can read his thoughts on beer and the beer industry on his blog, This Is Why I’m Drunk, and send him suggestions on how to get his wife to drink craft beer via Twitter at @bryandroth.