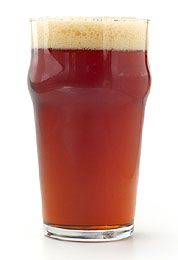 Bitter is the term given to a category of English pale ales, named for their relative bitterness compared to the English mild ale. Though they’re called bitter, they’re no more so than your average American pale ale. Ideally, English bitter ales should be session-able. Imagine drinking them in rounds at the local pub.
The bitter ales tend to be categorized by their original gravity. “Ordinary bitter” or simply “bitter” refers to the lowest gravity ales. These are ideal for a long day of drinking at the local watering hole. Stronger versions may be called “special” or “best bitter”. Finally, many American drinkers will recognize the name ESB, or Extra Special Bitter. The classic example is Fuller’s ESB (OG: 1.054), and many American brewers have adopted the term for their own English-style pale ales.
Though the naming convention is somewhat loosely defined in the UK, the BJCP has put some guidelines in place to give homebrewers and homebrew judges a framework for comparison. As you can see, gravities and IBUs, tend to increase as we move up the scale: