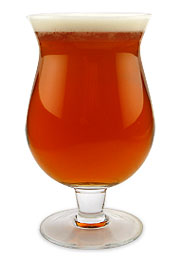 If you’re like me, you’re already thinking ahead to the warmer temperatures of spring. Traditional Belgian and French brewers did the same thing. In the winter, they would often brew a Bière de Mars (March beer) that could stand up to the final colder months, yet still be enjoyable in the warmer spring weather.
According the BJCP, Bière de Mars is a subset of the Bière de Garde category (16D). Bière de Garde is a strong ale meant to be stored. As such, it often displays a somewhat funky, “corked” cellar character. Bière de Mars, on the other hand, is intended to be consumed fresh. Maybe this freshness is reminiscent of spring.
The main features of the style include a malt forward balance and toasty or toffee-like sweetness, with little to no hop aroma. The finish is dry, with the yeast contributing some fruity and/or spicy characteristics.
The most prominent commercial example in the US is probably New Belgium’s Bière de Mars. It sits comfortably within the BJCP guidelines for the Bière de Garde style:

New Belgium’s rendition also uses lemon peel to enhance the fruity aroma of the beer. If you’re so inclined, add the fresh zest from one lemon during the last ten minutes of the boil.
Bière de Mars Beer Recipe
(Partial Mash, five gallon batch)
Specifications
OG: 1.066-1.073
FG: 1.015-1.017
ABV: 6.7-7.3%
IBUs: 20-24
SRM: 11
Ingredients
6.6 lbs. Light Liquid Malt Extract
1 lb. Amber Dried Malt Extract
1 lb. Munich Malt
1 lb. Belgian Aromatic Malt
1 lb. Belgian Biscuit Malt
1 lb. Flaked Oats
1 lb. Belgian Candi Sugar (light)
.75 oz Styrian Gold hops at :60 (3.8 AAUs)
.75 oz Styrian Gold hops at :20 (3.8 AAUs)
zest from one lemon at :10 (optional)
Yeast: Safbrew S-33
Beer Recipe Directions
Mash the crushed grains and flaked oats in 1.5 gallons of water at 150F. Strain the grains and rinse with 1 gallon of water at 170F. Mix in malt extracts and Belgian candi sugar. Add water if needed. (Calculated boil volume: 7 gallons)
Bring wort to a boil. Add hops as scheduled and lemon peel if desired. Whirlpool, chill, and transfer to a clean, sanitized fermenter. If needed, mix in enough clean, sanitized water to make five gallons. Pitch yeast at 70F and ferment at 65-70F for seven days, then transfer to secondary for ten. Bottle or keg as you would normally.
Are you a fan of brewing Bière de Mars? Do you have a Bière de Mars beer recipe you’d like to share with us? Share your tips in the comments below!
—–
David Ackley is a beer writer, brewer, and self-described “craft beer crusader.” He holds a General Certificate in Brewing from the Institute of Brewing and Distilling and is founder and editor of the Local Beer Blog.