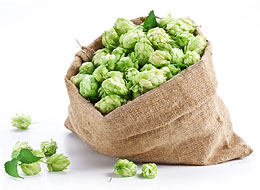 When it comes to making your own beer at home, hops are an essential ingredient. Hops are added to beer to make it taste bitter. It’s what counters the sweetness that the malted barley brings to a recipe. There are many different types of hops that are available on the market. Along with the bitterness each one imparts it’s own unique subtleties to the beer.
But besides being a flavoring component, hops also act as preservatives. This is a much lesser know fact. In earlier days, hops were depended upon to help keep the beer from spoilage. Since the advancement of sanitation over the last couple of centuries, hops are not need for this purpose, but we still put it in the beer anyway because we like it!
Besides having this preservative power, hops have been found to have other valuable qualities as well. Here are some of the amazing benefits of beer hops listed below: