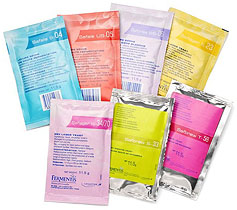 Beer yeast is what makes the beer alcoholic through fermentation. Since fermentation is a vital part of brewing beer, commercial as well as home breweries try to source the best brewer’s yeast to produce high quality beer. Yeast converts the beer wort’s sugars into alcohol. It also produces carbon dioxide in the brew. This beer yeast is responsible for imparting some of the characteristic beer feel and taste.
Brewing beer takes time, patience, and the right equipment. Since a fermentation takes place slowly over a period of a few days, beer fermenters are fitted with an air-lock to protect the brew from oxidation and contamination. The air-lock allow CO2 gas from the fermentation to escape without the outside environment getting in and potentially compromising the beer’s freshness. A beer yeast acts on the stored liquid to produce the intoxicating aroma and the base of the beverage.
All beer yeast are not the same, and a brewer must choose a yeast strain that will bring the desired flavor and appearance to the beer. Beer yeast usually comes in two basic varieties – top fermenting and bottom fermenting. Each has specific characteristics and affects the beer in a specific manner. Top fermenting yeast gathers near the upper surface of the beer wort while the bottom fermenting collects at the bottom of fermenter.
Beer yeast is what gives the beer alcoholic character. It produces ethanol alcohol through metabolism. Yeast is a living, microscopic, single-celled life form that is adept in anaerobic respiration. The amount of yeast required to ferment beer depends upon the volume of malt syrup and water. However, before a brewer can begin the fermentation, the beer yeast needs to grow in number. This is achieved by placing the beer yeast in a small sample of the beer wort a couple of days earlier. This is called a yeast starter.