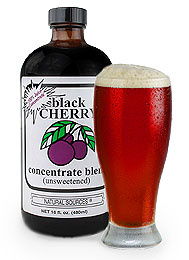 This weekend I decided to experiment a bit with a beer recipe from Randy Mosher’s excellent book, Radical Brewing. The recipe is for a Spiced Cherry Dubbel, recommended as a higher-gravity holiday brew:

Start with a good rich dubbel, toss in an additional pound of piloncillo or turbinado sugar, and use a combination of sweet (black) and sour (Montmorency) cherries, which should ferment in the beer for a month or so. A pound per gallon is a minimum. Two is better. One teaspoon of ceylon (true) cinnamon added at the end of the boil will enhance the natural spiciness of the sour cherries. Add one drop (no more!) of almond extract for added depth. Gravity: 1.070 to 1.078 (17 to 18.5P). Color: deep ruby-amber.

Earlier, I talked about some of the different ways of adding fruit to beer: whole fruit, fruit juice, fruit extract. In this case the beer recipe calls for 1-2 pounds of sweet and sour cherries per gallon of beer. But tart cherries are hard to find, and either way that will end up being a lot of fruit. I’ve heard of brewers using fruit concentrate, so I went to the local Whole Foods and found organic black cherry juice concentrate. I though maybe adding fruit juice to a beer would be the way to go. (This stuff would work well too.)
The bottle I bought showed the whole fruit equivalent, about three pounds. The tart cherry juice concentrate was a little expensive, so I went with the regular tart cherry juice, 32 ounces worth. Since the small jar of concentrate makes 32 ounces of juice and is equivalent to three pounds worth of fruit, I figured these two juices would have me covered for 6 pounds of sweet and sour cherries.
I was a little concerned about pectin, a complex carbohydrate that can cause haze, but I read that the processing of the fruit into concentrate breaks down the pectins, so I decided that wouldn’t be a problem.
After conducting a taste test, I determined that the combination of beer and juice would yield a fairly subtle cherry flavor, but very little fruit aroma. I read in Mosher’s book that sometimes adding at least a little whole fruit, even of a different kind, can contribute some extra pizzaz, so I decided to add twelve ounces of cranberries that had been in the freezer, crushing them well before adding them to the secondary fermenter. I then poured the concentrate and fruit juice into fermenter and siphoned the beer on top of it.
As I’m writing this, fermentation has picked up again, so clearly there were some additional sugars in the juices to be fermented. I’m going to give the batch a full four weeks in secondary (maybe transfer to a third fermenter depending on how much yeast collects at the bottom), bottle it up, and serve it at the annual Homebrew for Hunger event in Chapel Hill. This longer fermentation should allow sufficient time for the complex fruit sugars to break down and for the flavors to meld. Stay tuned — I’ll let you know how it turns out!
Have you made beer by adding fruit juice or concentrate? How did it go?
———————————————————————————————————
David Ackley is a beer writer, brewer, and self-described “craft beer crusader.” He holds a General Certificate in Brewing from the Institute of Brewing and Distilling and is founder and editor of the Local Beer Blog.