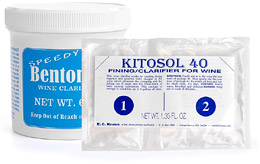 I purchased three cans of Alexander’s Pinot Noir concentrate and the recipe on the label calls for 4 tsp. Bentonite and the other ingredients to be put in the fermenter before the wine yeast. The people at our local brewing store said to use Super Kleer instead and that it was better than Bentonite. I understood that both Bentonite and Super Kleer to be for clarifying before you bottle and not to be put in prior to the yeast? Am I confused?
Name: Debbie C.
State: Missouri
—–
Hello Debbie,
You are right to have some concern.
Bentonite is a fining agent (clarifier) that can either be added in moderate amounts before the fermentation or in larger amounts after the fermentation. It is a clay that is very unique because of the fact that it has a static charge that is stronger than usual. It is this property that makes Bentonite valuable as a fining agent.
Bentonite is able to collect dead yeast cells and drag them to the bottom of the fermentation vessel, leaving a clear wine. Being continually suspended throughout the wine is one of the key factors of how well the Bentonite will work. If it is added and just sits at the bottom of the fermenter, it will do very little in the way of clearing a wine.
When added before the fermentation, not as much Bentonite is needed because it is relying on the fermentation activity to keep it stirred up. It is constantly being churned up by the rise of CO2 gas bubbles that are being created by the wine yeast. This is why your wine recipe only calls for 4 teaspoons. If added after the fermentation, more is needed to be effective, and several periodic stirring sessions are required by the wine maker, as well. 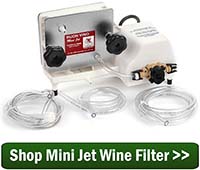 Super Kleer is actually a combination of two different fining agents. Both are liquids: Chitosan and Kiesolsol. We sell something just like it called Kitosol 40. The Chitosan has a positive charge and the Kiesolsol has a negative charge. Each come in their own little pouch, and each are stirred into the wine separately.
I have never added Super Kleer or Kitosol 40 to a wine before the fermentation, so I can’t tell you what it will do to the fermentation with any certainty, but my best guess is that it would slow the fermentation down to a painful crawl. This is because the amounts that are prepared in these pouches are dosed for a finished wine — way more than you would ever want to add to a fermentation.
The presumed effect is that Super Kleer would interfere with the majority of the active wine yeast by continuously trying to collect them and drag them to the bottom in small clumps. This clumping would severely affect the wine yeasts’ ability to ferment.
Happy Winemaking,
Ed Kraus
—–
Ed Kraus is a 3rd generation home brewer/winemaker and has been an owner of E. C. Kraus since 1999. He has been helping individuals make better wine and beer for over 25 years.

1 thought on “Adding Wine Clarifiers Before The Fermentation”