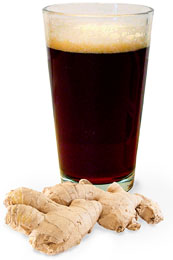 Before hops were a common ingredient, beer was flavored with all kinds of herbs, spices, vegetables, flowers, and roots. One such ingredient was ginger, the intensely flavored root frequently used in cooking Indian food and ginger bread cakes. In one of my favorite new brewing books, Sacred and Herbal Healing Beers, Stephen Buhner notes that ginger was used by the ancients for its medicinal properties that improve circulatory function, digestion, nausea, and a number of other ailments.
Ginger was also used when hops weren’t readily available. Marty Nachel notes that “The original ginger ale really was Ale. The concoction was a standard beer in colonial America because the colonists used ginger and other spices in the absence of hops to offset the malty sweetness of beer.” According to Sanborn Brown’s Wines and Beers of Old New England, “There were times in the country’s history before the introduction of lager beer when the commercial sale of ginger beer exceeded both hopped beer or cider.”
Some American craft breweries are reviving the use of ginger in beer making. Hardywood Park Craft Brewery, in Richmond, VA, makes a Gingerbread Stout that scored 100 out of 100 points in Beer Advocate Magazine. Believe it or not, you can brew your own ginger ale. It’s a great way to bring a little creativity and old-world tradition into the home brewery!
It’s easy to brew your own ginger ale! I like to use a brown ale as a base, but you can technically do it with any base beer you’d like.
How to Brew a Ginger Ale

Have you tried brewing with ginger before? How did it turn out?
——————————————————————————————————-
David Ackley is a beer writer, brewer, and self-described “craft beer crusader.” He holds a General Certificate in Brewing from the Institute of Brewing and Distilling and is founder of the Local Beer Blog.