Today’s guest post is from Larry of Brewer’s Friend. He shares some insights on how to improve your home brewing calculations.
————————————————
The science of brewing can be just as alluring as the smells, tastes, and never ending equipment accumulation related to home brewing. Brewing science is a wide topic that includes everything from yeast growth, to hops analysis, to the various brewing processes.
Let’s start at the beginning: the science and stats behind beer recipes. Beer recipes have several stats including original gravity, final gravity, IBUs (bitterness), SRM (color), and ABV (alcohol content).
A quick walk through of the stats:

Beer recipe software can be used to calculate all of these numbers:
Brewer’s Friend has set of over 20 basic calculators, plus a fully integrated recipe editor.
Taking measurements:
For taking gravity readings (the OG and FG) a hydrometer or refractometer is used. I find both work well as an essential tool for record keeping, but prefer hydrometers for their economy and consistent accuracy. Refractometers can be a little finicky at times in terms of accuracy, but they only require a drop or two of wort vs. a few ounces with hydrometer readings.
Don’t forget to pickup a graduated cylinder to hold the hydrometer sample!
Note: Hydrometer readings must be temperature corrected, since gravity density changes with temperature. Hydrometers are usually calibrated to 60F or 68F. Brewer’s Friend has a hydrometer temperature correction calculator that comes in handy. This way, even if your sample is still at a warm 100F, you can get a good idea of what the actual value is before it cools down.
Refractometer readings are given in Brix (which is effectively the same as Plato), but many home brewers work in specific gravity. Our refractometer calculator automatically handles this conversion, and accounts for the optional correction factor that some refractometers require.
Unfortunately there is no simple gadget to measure IBUs. The process is quite complex and requires a beer sample to be sent to a lab for analysis. Someday, maybe we’ll see a Kickstarter project that delivers IBU measurements in a hand held device?! 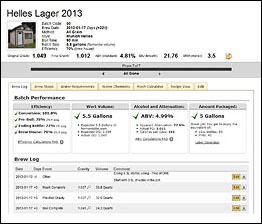 Recording your measurements:
Brewer’s Friend supports a brew feature that allows log entries for tasting notes, dates, and most importantly gravity and volume measurements. The log entries are used to calculate the batch’s actual ABV, efficiency, attenuation, and other stats so brewers know how their beer really turned out in comparison to a planned recipe.

The team behind Brewer’s Friend is a group of highly dedicated and experienced brewers, bloggers, and technologists whose mission is to make your brewing the best it can be. Check out our website for all your brewing calculation needs and don’t hesitate to reach out with any questions!
Cheers!
Guest post by Larry at Brewer’s Friend
https://www.brewersfriend.com