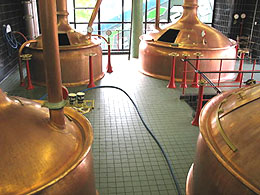 Dave Barry once said, “Not all chemicals are bad. Without chemicals such as hydrogen and oxygen, for example, there would be no way to make water, a vital ingredient in beer.” Indeed the four main ingredients of beer include barley, beer hops, beer yeast, and of course, water. The journey of making beer is made up of five basic steps:
1. Malting: The process of brewing begins with the grains – by far the most common being barley. This barley is first harvested then malted. This is a process where the grains are allowed to sprout or germinate. The barely is then heated to stop the sprouting at the optimal time. Then it is further dried under varying heat. Malting isolates the enzymes that are required for brewing. The temperature and length of time it is heated alters the character the malt will bring to the beer. Some malts are even roasted or toasted to bring out unique flavor and color. These are known as specialty malts.
2. Mashing: The next step is mashing. The malted barley is cracked through a grain mill. Then it is steeped in hot water. This mixture is call a wort. As long as you know how to make tea, you’ll be able to do this without any major disasters. Both processes are very similar. This helps to activate the enzymes in the barley so that they start breaking down and releasing the sugars.
3. Boiling: The wort is now boiled and at the same time hops are added at several points. Hops are responsible for adding distinctive flavors to the beer. They also act as natural preservatives. The variety of the hop and how long it is in the boiled controls how its flavor and aroma will contribute to the beer.
4. Fermentation: After boiling, the wort is cooled and removed from the grains. Beer yeast is then added to the wort. The brewing process is now over and it is time for the microbes to play their part. For a period of about 5 days the beer yeast will consume the natural sugars in the wort and metabolize them into both alcohol and carbon dioxide.
5. Bottling and Aging: Once the beer is fermented it will be mostly flat or un-carbonated. At this point the beer is either bottled or kegged and CO2 is forced into it. While many home brewers keg their beer and force-carbonate it, most still bottle. They add a small, specific amount of sugar just before bottling the beer. This facilitates a small fermentation under pressure which creates the carbonization the beer needs.
Another similar blog post that may be of interests is “The Basics Of All-Grain Brewing“. This adds greater detail to the mashing process and how it applies to the home brewer.