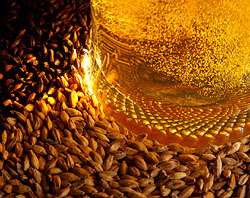 Beer is one of the most popular alcoholic beverages in the world, and it has innumerable health benefits. It is a rich source of magnesium, potassium, phosphorus, selenium, and the B complex group of vitamins. Because of the fact that it is loaded with nutrients, beer has earned the title of ‘liquid bread’.
With the all-grain brewing method, beer is made directly from malted barley grain. No malt extract is used in this process. All the brew’s malty character comes from the barley, itself. Here are the basic steps:

Barley and wheat are the most commonly used brewing grains. However, other grains such as rye are also used in making beer and the flavor of the beer largely depends on the type of grain used.